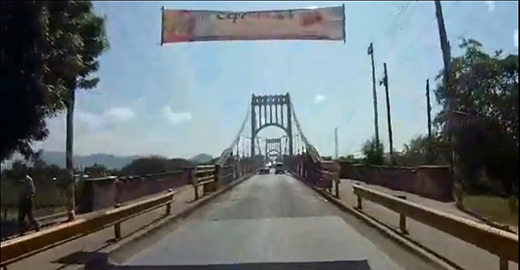 The Choluteca bridge is a suspension bridge in Honduras built by the U.S. Army Corps of Engineers between 1935 and 1937.

By Neal Beard, a member of the Rotary Club of Lawrenceburg, Tennessee, USA

For the past eleven years, I have traveled to Honduras with many other Rotarians to help on numerous Rotary humanitarian projects in the southwestern part of Honduras near the Pacific Ocean and in the mountains along the Nicaraguan border. 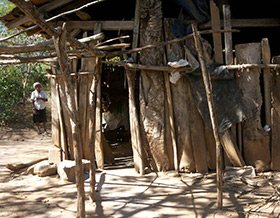 A homestead in southwestern Honduras.

The journey there takes me from Lawrenceburg via Nashville and Atlanta to Tegucigalpa, Honduras, and then down a long mountain road that connects with the Pan-American Highway that crosses this bridge. The journey is not as important as what lies on the other side of the bridge. On the other side lies my destination and that is where the adventure begins.

The United States Army Corps of Engineers built this bridge between 1935 and 1937. It is one of the few replicas of the Golden Gate Bridge that still exists, and it controls the flow of traffic from Guatemala to Panamá.

It serves as a metaphor for our work in Honduras, where we try to be a bridge between the advances and prosperity that we enjoy in the United States today and the less-advanced conditions and poverty that lies on the other of the bridge.

For me, it is like traveling back in time about 50 years. It so much reminds me of the poverty and conditions of my early childhood when some homes around us still did not have electricity. A time when we had to rely on the charity of others, when most of the clothes that we wore were used, purchased at a secondhand store, or given to us. A time when we raised most of our food, milked cows, slopped hogs, and raised chickens. A time when we were proud of the things we had and were happy and unknowing of the prosperity that many enjoyed beyond our kin.

Helping the people of Honduras have a better, healthier life is rewarding for me; it’s a way of going back and helping that young woman and child and his brothers and sisters – the young woman and siblings of my youth.

You can’t pay back all of the people who helped you become who you are, but you can pay it forward and help others – that is the reward of Rotary’s humanitarian service in our world.

Read more posts by Beard, and get advice for your own service project.

10 thoughts on “Crossing the Choluteca bridge”