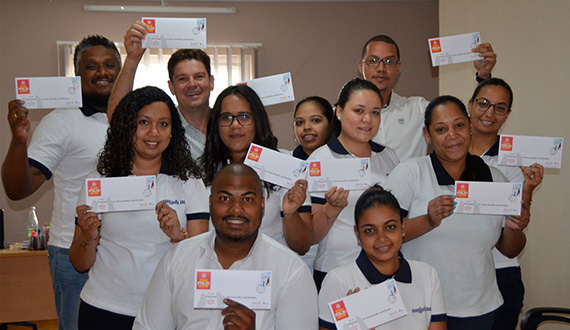 Employees from Myjob in Mauritius support the stamp fundraiser for polio eradication.

As Rotarians, we pride ourselves in taking collective action to create lasting change. And our fight to eradicate polio is without a doubt one of our finest efforts. For World Polio Day on 24 October, my club wanted to plan something different. We wanted an activity where anyone could donate their time, their funds, and their voice simultaneously, regardless of where they were in the world.

We were inspired by this year’s theme, Rotary Connects the World, and by the successful campaign to use celebrity ambassadors to promote our polio eradication efforts. We also looked to the success of the “World’s Biggest Commercial.” We came up with the idea to design a special commemorative cover, a stamped envelope that  people can collect and use to make donations to our polio eradication effort.

What is unique about this envelope, which was sold by Mauritius Post, is that it was designed to make it easy for people to use to make the “This Close” gesture, and then snap a photo of themselves to create a social media post. A line on the envelope “and I have proudly contributed” helps acknowledge every donation.

The fundraiser allowed people to:

The envelope includes “Countdown to History” and our new polio communication initiative, “Together, We End Polio,” combining three important polio messages in a single collectible envelope.

We have been able to sell 980 envelopes, raising roughly $2,600 for polio eradication. So let’s collect, contribute, and connect to the world … and end polio now. Learn more at www.rotaryfloreal.com