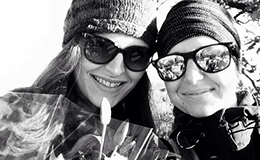 I am constantly in awe of the power of connection. This is what Rotary is all about. We unite in friendship to realize truthful, fair, good-willed, and beneficial outcomes in our communities and the world. For Rotary members and people like me, our lives are forever transformed by this powerful network.

I was 17 years old when Rotary became a guiding force in my life. I was a young woman hungry to see the world outside my own country. Thanks to Rotary, I was granted the opportunity to live in Brazil as a Rotary Youth Exchange Student for a year. The experience was transformative for many reasons, the foremost being the people I met along the way who continue to be central figures in my life.

Chance meeting on a night bus in Brazil
One of these important figures is Kate Kimmer, who I first met 10 years ago in the middle of Mato Grosso do Sul, Brazil, on a night bus. Instantly, we become friends —spending hours on end discussing the world and all the things we wished to do to make it a better place.

In June 2008, I reunited with Kate in the Atlanta airport on layover to Thailand. Kate had done a previous exchange in Thailand and was headed back, and I was lucky enough to join her along the way. On this trip I saw first-hand what life is like for many women in South East Asia (and more broadly for many women around the world) who survive by selling their bodies for sex. It was a reality I had been aware of previously. But like many things in life, it’s not until you see something first hand that you begin to comprehend the true reality.

We live inside the truth that the universe works in mysterious yet intentional ways that push us toward becoming the people we are meant to be.

Soon after, I headed off to India for a year to study international development in one of the most poverty and drought stricken areas in the country. Again, I had the opportunity to expand my understanding of  life. India is a place one goes to see everything and more.

Returning to the United States, I began over time to realize a reoccurring problem, gender inequality, existent in every place no matter how rich or destitute it was. I endeavored on a new trajectory, to bring female voices to life and make them publicly accessible from anywhere online. And so The Female Voice was born to give voice to women and girls from all different backgrounds, nationalities, and walks of life. 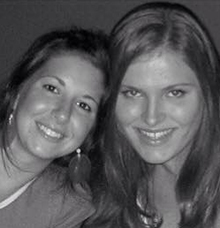 Meanwhile, Kate was also working hard to translate her passions and global awareness into work. After graduating from Indiana University, she eventually made her way to Portland where she began working to support victims of sex trafficking. With the encouragement and support of Rotary  members in Portland, she was selected as a Rotary Peace Fellow and began her studies at the International Christian University in Tokyo in September 2014.

As Kate was off to Japan, I continued to work on The Female Voice. Then it hit me. Why not go for the fellowship and further expand my work and mission? I did and a year later received the news that I, too, was headed for Tokyo.

Peace fellows in Tokyo
I have found amazing people, incredible culture, and critical academic exposure within my chosen fields in Tokyo. I continue to develop and realize my own dreams as a Peace Fellow alongside one of my best friends — Kate Kimmer — a person I would have never known if it were not for Rotary. The chance to study abroad with Kate for a second time has been a profound experience for both of us. Being a part of each other’s journeys for so long, we are able to support, encourage, and inspire one another in unique ways that often push us towards greater achievements.

In the process, we live inside the truth that the universe works in mysterious yet intentional ways that push us toward becoming the people we are meant to be. All of this, in the end, relies on the spirit of friendship — the essence of Rotary that I hold so dear and could never live without. To Rotarians worldwide, I thank you for making this friendship and so many others possible.