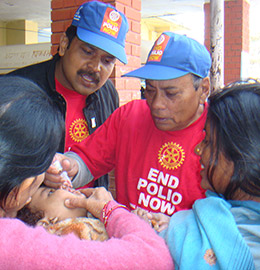 A child is immunized against polio in Nepal.

The Global Polio Eradication Initiative (GPEI) today will declare the South-East Asia region of the World Health Organization as polio-free, an important milestone in the worldwide effort to eradicate polio. The 11 countries in the region — Bangladesh, Bhutan, Democratic People’s Republic of Korea, India, Indonesia, Maldives, Myanmar, Nepal, Sri Lanka, Thailand, and Timor-Leste — are home to 1.8 billion people and represent the fourth of six regions worldwide to be officially certified polio-free.

This landmark didn’t just happen on its own, but embodies a lot of hard work by many dedicated volunteers. We recently contacted chairs of National PolioPlus Committees in the region to learn how their countries became polio-free and how Rotary took part in the process. The results were enlightening.

In Sri Lanka, N. R. Gajendran shared how a cease fire was negotiated in the Sri Lankan Civil War, called “the days of tranquility,” so that immunizations could be carried out across the country. The government had planned to do a National Immunization Day (NID) only in areas not impacted by the war, which meant about a third of the country’s children would not be vaccinated.

But after consulting with UNICEF, Rotary leaders and UNICEF established contact with the rebel party, the Liberation Tigers of Tamil Eelam, who still controlled some areas of the country, to pursue a cease fire. The rebel leader responded that if Rotary and UNICEF could persuade the government to stop the war for two days, they would be willing to lay down their guns too. “Our war is not with the children,” a letter from the rebel leader stated. Consequently, the immunization efforts reached approximately 95 percent of the country, and were conducted in about 5,000 midwife areas and 10,000 centers.

Subsequent NIDs became days of tranquility. Colombo proved to be the most challenging area, but with Rotary’s support, children typically not accessible to government care workers were reached. The last confirmed case of polio in Sri Lanka was in 1993.

Salim Reza, who had been on the Bangladesh Rotary Polio Committee for 20 years, said the biggest challenge to his country becoming polio-free was ignorance, a lack of education, and poverty. Awareness programs supported by Rotary, WHO, and UNICEF led to a greater awareness of polio eradication and a much increased participation in National Immunization Days. The most recent immunization day had a 99 percent rate of coverage.

Most Rotarians actively participate in the Immunization Days, and the national committee has worked together with the government since the start of the program, along with WHO and UNICEF. Through TV and radio, efforts are made to reach out to children who need to be immunized. Seminars are also arranged in different parts of Bangladesh.

Ratna Man Sakya shared how in Nepal, mobilizing health workers, securing commitments from political leaders, and organizing volunteers all over the country helped combat significant challenges. These included the rugged geographic terrain, a shortage of manpower, and a large reservoir of wild polio virus across the border in India. Nepal held its first National Immunization Days in 1996. The last indigenous case of wild polio virus was detected in 2000. Sakya noted the biggest success story is how Rotary, the Government of Nepal, WHO, UNICEF and other supporting agencies have been working hand in hand to eradicate polio in the country and keep it polio-free.