By Charlie Wasser, a member of the Rotary Club of Sunnyvale, California, USA

About 18 months ago, I transferred my membership to the Rotary Club of Sunnyvale, California, USA. I was excited when my new club embraced a literacy effort I had been involved in, receiving a global grant from The Rotary Foundation for a new media center in Hounde, Burkina Faso. 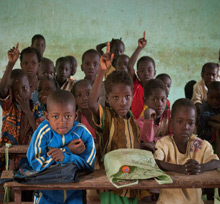 Children in Burkina Faso at one of several libraries built by Friends of African Village Libraries. Photo courtesy Charlie Wasser

Through the literacy project, residents in villages surrounding the town of Hounde will learn to write their own books and print them using computers in the media center. Our club is partnering with the host club of Ouagadougou-Savane and Friends of African Village Libraries, which has built seven libraries in surrounding villages.

I have been working with Friends of African Village Libraries for the past four years, mostly collecting funds from clubs in our district for books to stock the libraries. Michael Kevane, formerly head of the economics department at Santa Clara University, started the organization and is now its co-director. During the first few years of the literacy project, students from Santa Clara University, under Kevane’s tutelage, will spend a semester in the village as part of an immersion program, writing two books and teaching a villager how to write a book and create images. The books will then be added to the libraries.

A great feature of the Foundation’s new grant model, which District 5170 is helping test as part of the Future Vision pilot, is the requirement for global grants to be sustainable – for the project to be able to continue benefiting the local community after grant funds have been expended. Our project addresses sustainability in a number of ways.

Villagers who learn to write will teach other villagers to write. In addition, we are making use of local resources. The town of Hounde has agreed to pay the salary of a half-time employee who will work at the new media center.