The Degree 33 Surfboard Team consists of a half dozen members of Surfers Unite Rotarian Fellowship who raised more than $400,000 last year in the 100 Wave Challenge. This year due to COVID-19, participants can take part around the globe during an extended two-month period.

By Brett Morey, chair of Surfers Unite Rotarian Fellowship and past president of the Rotary Club of La Jolla Golden Triangle, California, USA

The world could use some more positivity. And we’re going to give it to them with a fun-filled global Zoom event Thursday evening, 3 September featuring former World Champion of Surfing Shaun Tomson of Durban South Africa. END_OF_DOCUMENT_TOKEN_TO_BE_REPLACED

The first-ever Tacoma Ocean Fest Youth Story Contest invited youth to write about the ocean and what it means to them.

At first, Hope was reluctant. She was on the verge of flunking school through poor attendance. But when Kathleen Figetakis, literacy chair at Tacoma Sunrise Rotary, Washington, USA, asked the Tacoma senior for one little favor – to put up posters in her school for the Tacoma Ocean Fest Youth Story Contest – Hope agreed. Six months later, she had not only won second prize in the contest, but she also graduated from high school – and helped the inaugural contest to be a wave of success. END_OF_DOCUMENT_TOKEN_TO_BE_REPLACED

By Brett Morey, chair of Surfers Unite Rotarian Fellowship and past president of the Rotary Club of La Jolla Golden Triangle, California, USA

Have you ever thought of turning a hobby or passion into something even more beneficial through Rotary? I am a third generation Californian and grew up bodyboarding at Huntington Beach and Del Mar, before starting to surf 34 years ago. Back in May, I got this crazy idea to do something with my interest in surfing. END_OF_DOCUMENT_TOKEN_TO_BE_REPLACED

In January, the Rotary Club of Mississauga Meadowvale hosted a Rotary Day event exploring what we as Rotary members can do to improve the health of mothers and their children, through our club projects and working with the United Nations. Rotary has had a long-standing relationship with the UN dating all the way back to its formation, and improving maternal health and reducing child mortality are two of the UN Millennium Development Goals.

Thanks to my Rotary Youth Exchange in Brazil, I now have friends from all corners of the globe. I have made some of the best friends I’ve ever had here, and it has been an amazing experience.

A little more than two years ago, I was sitting along the highway in a small town in the Queensland Outback watching traffic go by, when two members of a Rotary Youth Exchange safari tour walked by and struck up a conversation. Little did I know that simple conversation, and later meeting the entire busload of teens on the safari, would eventually lead to my own Rotary Youth Exchange, with financial support from the Rotary District that covers Queensland and from members and clubs throughout southeast Australia. END_OF_DOCUMENT_TOKEN_TO_BE_REPLACED

Ema Talam addresses Rotary members in Oslo, Norway, during the program on dialogue as a means of promoting peace.

By Ema Talam, a university student from Bosnia and Herzegovina

This summer, I was fortunate enough to be selected as one of 16 participants from the Western Balkans to participate in a program for university students and young professionals, age 20 through 30, organized by The Rotary Club of Oslo Vest, Norway, and supported by other Rotary clubs throughout Norway and the Western Balkans.

When I boarded the plane on 15 June, I did not know that this was going to be one of the most interesting summers of my life. I didn’t know much about Rotary and I knew END_OF_DOCUMENT_TOKEN_TO_BE_REPLACED

By Jurag Gago, a Rotary Youth Exchange Student from Slovakia to the United States

I am from the Slovak Republic, right in the heart of Europe. It is a small country bordered by Austria, Hungary, Ukraine, Poland, and the Czech Republic. I grew up in Trenčín with my brother, Martin and my mom and dad.

I just returned from one of the most wonderful experiences in my life. The Rotary Club of Trenčín in District 2240 decided to sponsor me for a Rotary Youth Exchange to Chicago, where I was hosted by the Rotary Club of Aurora Sunrise in a suburb of that great city. I was excited about the exchange because I knew it would challenge me a lot and I wanted to see how far I could grow on a personal and mental level. It gave me all that I could ever have expected. END_OF_DOCUMENT_TOKEN_TO_BE_REPLACED

Through my Interact club in Argentina, I learned of an opportunity last year to go on a Rotary Youth Exchange to Muenster, Germany. I want to echo what others have said on this blog, that Youth Exchange is an unforgettable experience.

I had the pleasure of staying with two families in Germany — the Kirchhoffs and Beikers — and I consider both part of my family. Getting to know the German culture, to be a part of it, and to be immersed in it, I developed a new appreciation for my home country, and the world beyond. It made me realize just how amazing this world is, and gave me a desire to work to make the world a better place.  END_OF_DOCUMENT_TOKEN_TO_BE_REPLACED 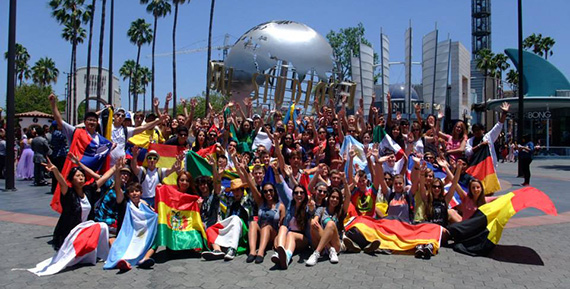 Victoria Alvarez and other youth exchange students during their trip to the West Coast of the United States.

By Victoria Alvarez, a Rotary Youth Exchange student from Argentina to the United States

Most of you have probably heard of Rotary Youth Exchange, and maybe some of you have even been involved with the program. I recently completed my exchange year in the United States, and wanted to share the perspective of someone who has just taken part in one.

I come from Argentina, a little country on the edge of South America that you may have heard of recently because of the World Cup. It is in many ways very different from the United States. In signing up for an exchange to America, I stepped out alone into a culture unlike any I had experienced, in an unfamiliar environment, in a house I did not know, to live with people I did not know. Leaving behind family, friends, and most of what was familiar. END_OF_DOCUMENT_TOKEN_TO_BE_REPLACED

Darren Luong, left, and Matt Pomeroy receive certificates from District 7090 for their work with youth service.

By Darren Luong, a member of the E-Club of Southern Ontario, Canada & Western New York

Sixteen years ago, as a student at Cardinal Heights Middle School in Hamilton, Ontario, Canada, I received an award from the local Rotary club at my graduation. I didn’t know what Rotary was or even why I had received the award. Time went by and it was forgotten at the bottom of some boxes packed away.

Eight years later, I was sponsored to go to a Rotary Youth Leadership Awards event in my district. This life-changing week and the support from Rotary throughout my life has convinced me that this organization is full of amazing people that can really change the world for the better. END_OF_DOCUMENT_TOKEN_TO_BE_REPLACED