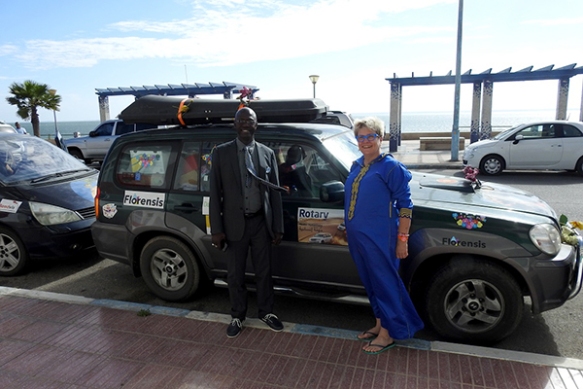 The Dutch Rotarians took 11 cars to The Gambia, which were auctioned off to support women’s education.

By Tineke Ruijter, Rotary Club of Zwijndrecht, The Netherlands

Our adventure started on 21 October 2017. Rally teams of six Dutch Rotary clubs, accompanied by five independent supporting teams, departed from Zwijndrecht in the Netherlands for a challenging 7,500 km (4,600 mile) journey to The Gambia, where we arrived on 11 November. The trip passed through Belgium, France, Spain, Morocco, Mauritania, and Senegal, through dessert areas and sometimes accompanied by local guides for security reasons.

The 11 cars that took us to The Gambia were sponsored and auctioned at final destination. The result: $50,000 to be donated to a Dutch Rotary initiative called  “School Plan Gambia,” which enables young women to attend school up to and including university. END_OF_DOCUMENT_TOKEN_TO_BE_REPLACED 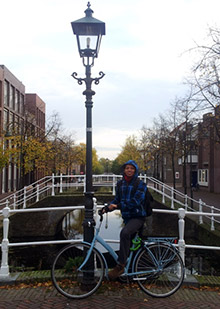 Rotary Scholar Badruz Zaman with his bicycle in Delft, Netherlands.

When I was selected to receive a scholarship to do a master’s study at UNESCO-IHE in The Netherlands, a brand new chapter in my life began.

Since October, I have been studying hydroinformatics, water science, and engineering at the Delft campus. Starting a new phase of one’s life is not always easy, and so it has been with me. When I arrived at the airport in the Netherlands, it was so cold I could feel it in my bones. Cooking for myself has been an experience, and of course many things have tasted terrible since I have never cooked before. END_OF_DOCUMENT_TOKEN_TO_BE_REPLACED 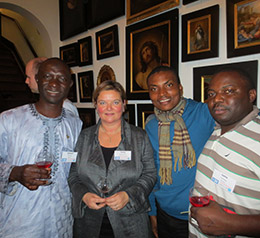 Emmanuel Umolu, with scarf, and his host counselor Tanny Augustinus, second from left, a member of the Rotary Club of Delft-Koningsveld, at a welcoming event for the second class of Rotary Scholars at UNESCO-IHE.

Three months have gone by since I began my master’s program in Hydraulic Engineering – Land and Water Development at UNESCO-IHE as a Rotary Scholar. The pace of learning has been quite intense. Indeed, most students realized within the first few weeks that the rector was right when he warned us during opening week that the suffix IHE does not mean  “International Holiday in Europe.” END_OF_DOCUMENT_TOKEN_TO_BE_REPLACED

By Mark Glickman, rabbi of two synagogues in the Seattle area and a religion columnist for the Seattle Times. His book Burnt Pearls: The Rise, Fall and Redemption of the Nazi Jewish Library, will be published by the Jewish Publication Society next year.

My wife is a past-president of the Rotary Club of Duvall, Washington, USA, and I’ve had the opportunity to participate as her sidekick ever since she joined. During those years, I’ve come to know Rotary as a group of wonderful people doing important work and showing deep commitment to bettering their communities and the world.

That’s why I was surprised to see Rotary listed as a subversive organization and an enemy of human progress.  END_OF_DOCUMENT_TOKEN_TO_BE_REPLACED

We made this video recently about the strategic partnership between Rotary and UNESCO-IHE Institute for Water Education.

UNESCO-IHE is the only international water management graduate school in the world. Rotary is sponsoring up to eight students a year for any of three master of science programs at the institute in Delft, the Netherlands. END_OF_DOCUMENT_TOKEN_TO_BE_REPLACED

RI President Sakuji Tanaka (second from right) visits a lab at UNESCO-IHE in Delft, The Netherlands, in November. From left are Kaycee Okoli, a Rotary Scholar from Nigeria; Titia Jonkman, spouse of governor Nico Jonkman of District 1600; and Henk Jaap Kloosterman, the district’s UNESCO-IHE coordinator.

My Rotary life suddenly changed in late 2011, when Rotary Foundation Trustee Stephen R. Brown dropped me an email, saying he was coming to The Netherlands to talk to UNESCO-IHE Institute for Water Education.

I knew Stephen from his former involvement in efforts on getting Rotary started in Afghanistan and the Sultanate of Oman (where I lived at the time), and now I suddenly found out that Steve was END_OF_DOCUMENT_TOKEN_TO_BE_REPLACED

Leaving Nigeria for Delft, Netherlands, to take part in a Rotary scholarship program at UNESCO-IHE has been an overwhelmingly positive experience. It has been a goal of mine to pursue advanced studies in hydraulic engineering. Being a Rotary scholar, not only has funding been provided for my graduate studies, but I am part of a strategy conceived by Rotary to address the complex issues of water and sanitation. It inspires me to rise to the challenge of seeking solutions to the world’s water and sanitation crisis as a water professional. END_OF_DOCUMENT_TOKEN_TO_BE_REPLACED