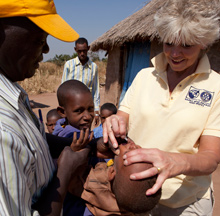 Ann Lee Hussey immunizing a child against polio in Chad.

As a 17-month-old toddler, I contracted polio. Burning up with fever, I was paralyzed from the waist down. It was July 1955, only three months after Jonas Salk’s vaccine was released to the public. I was lucky to regain the use of most but not all of my leg muscles. Today, after multiple surgeries, braces, and physical therapy, I am able to walk with limitations. END_OF_DOCUMENT_TOKEN_TO_BE_REPLACED 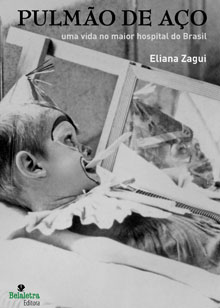 Pulmão de Aço (Iron Lung), published this year in Brazil, tells the story of Eliana Zagui, a polio survivor who has lived for decades in a hospital in Brazil.

Before it was eradicated through the effort of massive immunization campaigns in 1989, poliomyelitis was prevalent in Brazil. The lack of vaccine and poor sanitation in small towns resulted in thousands of victims a year. Avoiding polio was often a matter of luck.

In January 1976, at the age of two, my luck ran out. I woke up with a fever and weak lower limbs. Although my parents were used to my recurrent episodes of sore throat, they brought me to the nearest city of Jaboticabal for medical treatment. The next day, lacking a diagnosis, I was sent to Ribeirão Preto, a larger city with better medical facilities. By the time the doctors END_OF_DOCUMENT_TOKEN_TO_BE_REPLACED

By Lisa Hebson, a participant in the World’s Biggest Commercial and resident of Evanston, Illinois, USA. Hebson’s brother-in-law is a creative director at SCC, the ad agency that helped develop the commercial for Rotary.

My brother-in-law is very enthusiastic about Rotary’s “This Close” campaign. It is a really exciting collaboration of people.

A few weeks ago, I promised him I would take 100 photos of people for the World’s Biggest Commercial. It would be my gift to him, and a challenging goal for me to strive for in the new year. END_OF_DOCUMENT_TOKEN_TO_BE_REPLACED

RI President Sakuji Tanaka (second from right) visits a lab at UNESCO-IHE in Delft, The Netherlands, in November. From left are Kaycee Okoli, a Rotary Scholar from Nigeria; Titia Jonkman, spouse of governor Nico Jonkman of District 1600; and Henk Jaap Kloosterman, the district’s UNESCO-IHE coordinator.

My Rotary life suddenly changed in late 2011, when Rotary Foundation Trustee Stephen R. Brown dropped me an email, saying he was coming to The Netherlands to talk to UNESCO-IHE Institute for Water Education.

I knew Stephen from his former involvement in efforts on getting Rotary started in Afghanistan and the Sultanate of Oman (where I lived at the time), and now I suddenly found out that Steve was END_OF_DOCUMENT_TOKEN_TO_BE_REPLACED

Leaving Nigeria for Delft, Netherlands, to take part in a Rotary scholarship program at UNESCO-IHE has been an overwhelmingly positive experience. It has been a goal of mine to pursue advanced studies in hydraulic engineering. Being a Rotary scholar, not only has funding been provided for my graduate studies, but I am part of a strategy conceived by Rotary to address the complex issues of water and sanitation. It inspires me to rise to the challenge of seeking solutions to the world’s water and sanitation crisis as a water professional. END_OF_DOCUMENT_TOKEN_TO_BE_REPLACED