New members of the Sunrise after Dark satellite club during an induction ceremony earlier this year.

Editor’s Note: Learn more about flexible club formats in this course in the Learning Center

By Tracey Antee, past president of the Rotary Club of Opelousas Sunrise, Louisiana, USA

During my tenure as club president in 2019-20, I made a goal of starting a satellite club that would meet after regular business hours, hence the name Sunrise after Dark. A young professional group in the community just ended, and it seemed like the perfect opportunity to reach out to these individuals and invite them to join Rotary, within the ease provided by the satellite format. END_OF_DOCUMENT_TOKEN_TO_BE_REPLACED

In early 2019, I received an online membership inquiry from Dicky Armando, who lived in Pontianak in the Indonesian province of West Kalimantan. Pontianak is about 735 kilometres away from Jakarta and reachable by airplane in less than two hours. For many years, there has never been a Rotary presence in Pontianak. I realized that this was an opportunity to expand Rotary’s presence on the biggest island of Indonesia. END_OF_DOCUMENT_TOKEN_TO_BE_REPLACED 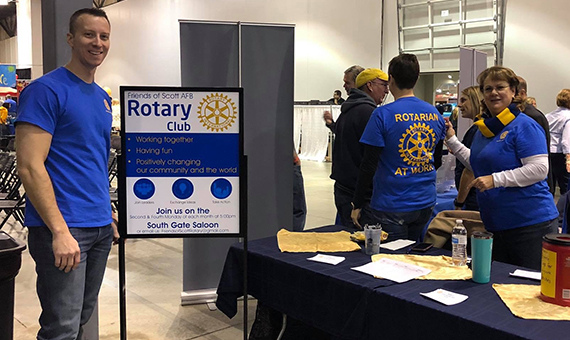 The Friends of Scott-Shiloh Rotary Club holds an event on the air force base.

A little more than a year ago, I was looking to join Rotary. I wanted to be involved in Rotary but also help out Scott Air Force Base in St. Claire County, near St. Louis, Illinois. The base is a big part of our community, and I knew Rotary could help connect men and women in the service with life outside the base. END_OF_DOCUMENT_TOKEN_TO_BE_REPLACED

Members of the Y Garth club at its charter event.

By Douglas Nash, past president of the Rotary Club of Chelwood Bridge, England

A while ago, when my good friend Charles and I started talking about Rotary and the possibility of him becoming a member, he was a little apprehensive.

That is until I explained that Rotary has gone through a number of changes, keeping our core values but embracing the idea of flexibility: that all clubs need not have the same structure, dress code, or event schedule. These changes are embraced in the concept of satellite clubs. END_OF_DOCUMENT_TOKEN_TO_BE_REPLACED

Rotary and Rotaract members in Taipei, Taiwan, take part in an after-hours service project. Creating a separate after-hour meeting can be an effective strategy to attract members your main group isn’t reaching.

When I first became a member, I was interested in membership. I was new and didn’t know many people in the club and the incoming president asked me to be Sergeant at Arms. It’s a good way to get to know everybody and it’s fun.

In the club of 65 members, the same 10 people seemed to be the ones that were involved in everything. I thought it would be an easy job to engage the whole group and get the rest of them involved. After eight months, I had some success, but not as much as I had thought. It became apparent that it would be easier to build a new group to attract a younger and more vibrant membership base. END_OF_DOCUMENT_TOKEN_TO_BE_REPLACED

For the last few months, I’ve been helping exuberant members of the Leeds Phoenix Satellite Rotary Club get established. I’ve been on a wonderful voyage watching as a new network of professionals rediscover Rotary’s roots. END_OF_DOCUMENT_TOKEN_TO_BE_REPLACED

One of the ongoing challenges in Rotary is maintaining a healthy level of membership. My club of Haute Rive is no exception. We started the club in 2014 with 20 members, and despite the fact that we have gained new members since then, we’ve also lost a few. So much so that membership fell to just 18 as of 1 July 2017. Fortunately, our leadership team was proactive and began forming a plan to address the situation. END_OF_DOCUMENT_TOKEN_TO_BE_REPLACED

Recently, I attended a memorable event, the inauguration of a 15-member satellite club, Garth, in South Wales District 1150. What is unique about this satellite is that it is being hosted by my own club of Chelwood Bridge, which is in District 1200. How is that so? END_OF_DOCUMENT_TOKEN_TO_BE_REPLACED