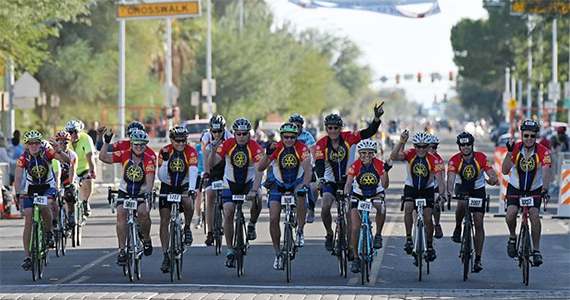 Rotarians participate in the El Tour de Tucson in Arizona, USA, in 2016.

Roughly 10 years ago, Rotarian Michael J. Harris of the Casas Adobes Rotary was debating ways to help small Rotary clubs take advantage of the Bill & Melinda Gates Foundation’s 2:1 match for contributions to PolioPlus. For some time, Mike had also lobbied Perimeter Bicycling to allow Rotary to field a team in El Tour de Tucson as one of the ride’s “beneficiaries.”  He thought that would be a great opportunity for clubs large or small. Mike could not have imagined what his pet project would become. Or, knowing Mike, maybe he could. END_OF_DOCUMENT_TOKEN_TO_BE_REPLACED

As of 13 December, the ride had raised $11.7 million for polio eradication, after the match by the Bill and Melinda Gates Foundation, bringing the total funds raised since inception of the ride to a little more than $47 million. Miles to End Polio staff riders raised $278,000 this year. About $66,000 was raised through the team’s Rotary Ideas page. 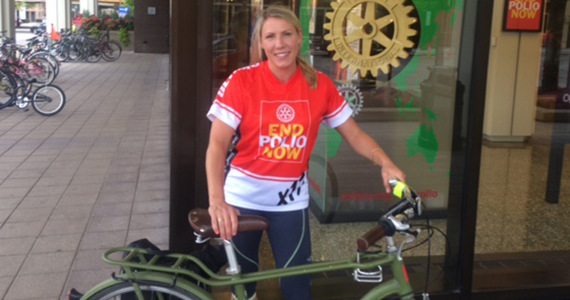 Kea Gorden before a training ride in Evanston.

On World Polio Day, I watched Rotary’s livestream event and realized that I really am in the middle of history in the making. As part of the Rotary staff Miles to End Polio team, I will be riding 106 miles on 18 November in the El Tour de Tucson. Riding that far is not something I’ve ever done before. But it gives me a great sense of accomplishment to feel like I can be a part of an effort that is having such a significant impact. As I watched Bill Gates announce his belief that this year will be the one where polio is finally stopped, I realized how close we really all. END_OF_DOCUMENT_TOKEN_TO_BE_REPLACED 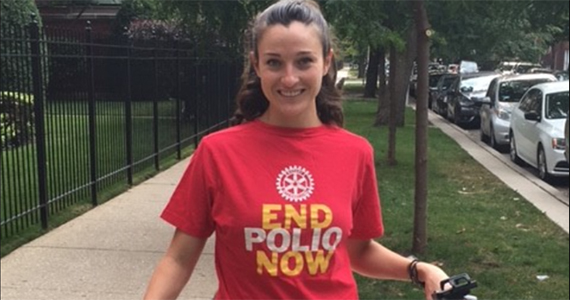 Since starting at Rotary in August 2015, I have been fortunate enough to support both the 2015 and 2016 Miles to End Polio teams. While supporting these teams, I’ve come to know many Rotarians and staff who are committed to funding the fight to end polio. I admire their hard work and dedication; they’ve inspired me to do more, to finally put myself forward and join the ranks of Rotary’s volunteer army. END_OF_DOCUMENT_TOKEN_TO_BE_REPLACED

On 19 November, Rotary staff joined Rotary members from District 5500 (Arizona, USA) and around the world in El Tour de Tucson, one of the premier organized fundraising rides in the United States. This year’s staff team met the challenge head on, completing 104-miles in good spirits and with only one flat tire. END_OF_DOCUMENT_TOKEN_TO_BE_REPLACED