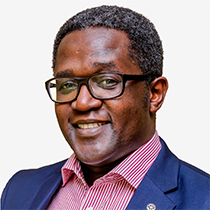 I gravitate naturally to statistics despite the negative feelings some people have about them. I think that information is the fuel that our world runs on and without it our systems will sputter, stall, and shut down. That is because statistics are significant in decision making.

When I joined the Rotary Club of Nairobi East, Kenya, 19 years ago, I was told that good Rotarians were defined by the regularity of their attendance, the frequency of their gifts to The Rotary Foundation, and most importantly by their ability to introduce new members to the club. END_OF_DOCUMENT_TOKEN_TO_BE_REPLACED

Despite raging wildfires on its outskirts, which at times came within yards of the city, the City of Cape Town, South Africa, proudly carried on with its planned cycle race earlier this year. The Cape Town Cycle Tour is organized and managed by Rotary clubs in District 9350 in partnership with local riding clubs of the Pedal Power Association. About 37,000 cyclists from around the world registered for what is the world’s largest timed cycle race in its 38th year.

The cycle race had been in major jeopardy, as the mountains of the beautiful Cape Peninsula had suffered from devastating fires in the 10 days preceding the race. Although the wildfires forced the race to be reduced from 103 kilometers to 47 kilometers, and the route to be altered to keep roads open for fire engines, everyone got into the spirit of the event. END_OF_DOCUMENT_TOKEN_TO_BE_REPLACED

By Evan Burrell, a member of the Rotary Club of Turramurra, New South Wales, Australia, and a regular contributor to this blog

If you are a member of Rotary, you probably already know that it’s one of the largest and oldest service organizations, that we try to attract good people and equip them to be even better, and that we are all about doing good works in our local communities. But what does the general public think about Rotary? END_OF_DOCUMENT_TOKEN_TO_BE_REPLACED

Roy Gandy, left, and volunteers stand by a ramp they built for a 47-year-old woman who suffered a severe stroke in January.

As manager of Rotary International’s social media channels, I’ve heard from Rotary members who say they don’t have a good story to tell about their club. But everyone has a story to tell. And I’ve heard some good ones from Rotarians.

You might look at a ramp outside of a house, and just see a wooden ramp. I see a lot of heart – as well as a way to help attract members and donations to a Rotary club. END_OF_DOCUMENT_TOKEN_TO_BE_REPLACED 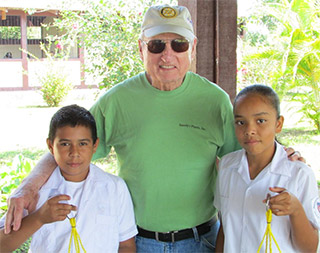 By Bob Hope, a member of the Rotary club of Atlanta, Georgia, USA

I am a longtime veteran of the public relations business in New York and Atlanta and a member of the Rotary Club of Atlanta. For the past 17 years, I have organized a group of business leaders who travel to rural Honduras to work on schools and medical clinics as well as in small mountain villages. Our efforts in Honduras have been supported generously by The END_OF_DOCUMENT_TOKEN_TO_BE_REPLACED

A digital billboard advertises Rotary near the George Massey Tunnel in Vancouver, Canada.

Have you noticed how digital flat screen signs are popping up in banks, fast-food outlets, airports, sports areas and numerous other locations? They are replacing traditional fixed printed billboards on highways. This new media offers opportunities for Rotary.

In August, the Rotary Club of Ladner (Delta) in suburban Vancouver, British Columbia, Canada, invited a sales rep from one of the major digital billboard companies as a speaker at a regular meeting of the club. At the end of his presentation he was asked if he would give comp space to Rotary, and he quickly agreed. END_OF_DOCUMENT_TOKEN_TO_BE_REPLACED