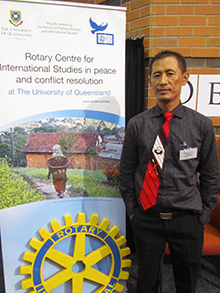 Athili Sapriina during the annual Rotary Peace Fellow seminar at the University of Queensland, Australia.

By Athili Sapriina, 2013-2014 Rotary Peace Fellow at the University of Queensland, Australia

The three million Nagas are indigenous peoples of the mountainous frontier between India and Burma. Since the end of British colonialism, Nagas have fiercely defended their independence resulting in the death of thousands — Indians, Burmese and Nagas.

END_OF_DOCUMENT_TOKEN_TO_BE_REPLACED

Rotary in Australia on the road to reconciliation - Rotary Voices Podcast