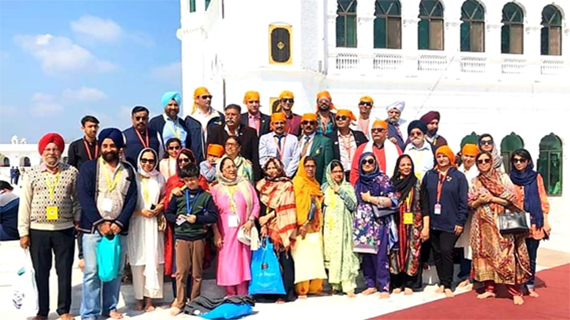 In March, members of Rotary, Rotaract, and Interact from both Pakistan and India gathered together at Kartarpar Sabib a shrine holy to Sikhs.

By Sajid Pervaiz, past governor of District 3272, member of the Rotary Club of Ruryila, Pakistan

In March, members of Rotary, Rotaract, and Interact from both Pakistan and India gathered together at a holy shrine on the border for an afternoon of food, fun, and fellowship. It was a small, but significant step toward building peace between our two countries.

Ever since attending a breakout session on healing the wounds of war at the 2018 Rotary International Convention in Toronto, Canada, I have had a heart to draw members of the Rotary family together to talk about peace. Being from Pakistan, I have seen how the tensions between my country and India have disrupted harmonious relationships. 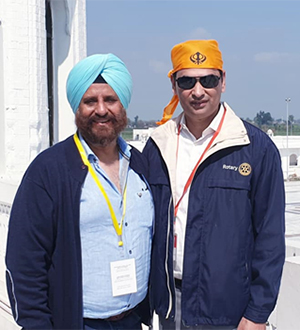 Recently, I had a chance to put my idea into motion, and reached out to my Rotary friends in India. Upkar Singh Sethi from the Rotary Club of Amritsar South and past governor of District 3070 (India), agreed to organize the meeting from the India side of the border.

We held the event at Kartarpar Sabib, a shrine in Pakistan built on the site where Guru Nanak, founder of Sikhism, settled and assembled the first Sikh community in the 16th century. Because of the tensions between the two countries, it has been difficult for Sikhs in India to visit the shrine. But in 2018, the government of Pakistan opened up a corridor so pilgrims from India could visit the shrine visa-free.

On that day in March, we stood together in goodwill and fellowship, among the other visitors who come to venerate the site. It was exhilarating. Sethi expressed deep gratitude for the opportunity and noted how his club had limited its delegation to a little more than 20 members because of the strict protocols for visiting through the corridor.

“However, we were amazed to see the response from across the border, where more than 50 Rotarians from various clubs turned out to receive us and join us in paying homage to this holiest of Sikh shrines,” he said.

Once the COVID-19 pandemic is over, we plan to invite a delegation from India four times a year to join us in building goodwill and friendship between our two countries.

It may have been a small effort at peacemaking, but it is the start of an evolutionary process of achieving peace and justice with the greatest speed and grace.

About the author: Sajid Pervaiz is a member of the Rotary Action Group for Peace and an assistant Rotary Public Image Coordinator. He served as a representative to the 2019 Council on Legislation and is a member of the Pakistan National Polio Plus Committee

10 thoughts on “Promoting peace on the Pakistan-India border”