By S.R. Yogananda, past district governor, past regional Rotary Foundation coordinator, and a member of the Rotary Bangalore East, Bengaluru, India

The year was 1987. I had come back from the Sultanate of Oman and was running a consumer products distribution company in Bangalore, India, when a business executive came to my office one evening. He said “I have been watching the way you do business. You are not taking short cuts, you have asked your staff and accountants to follow all the government regulations. I would like to invite you to join my Rotary club.” Rotary, he said “amongst other things, stands for integrity”

After attending a few meetings, I was inducted into the Rotary Club of Bangalore East during a colorful event in a lovely atmosphere. I attended all club and district events and began to gain a deeper understanding of this wonderful organization. I was delighted to learn that Rotary does not endorse any particular religion and is beyond boundary restrictions. Integrity is a pillar on which Rotary stands. 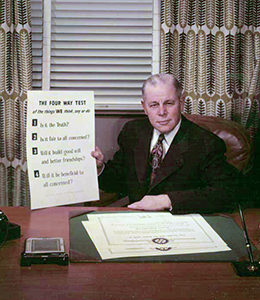 The story of Herbert Taylor, the past RI president who created The Four-Way Test, fascinated me, so much so that when I became president of my club I put up a large sign of the test along a busy road in Bangalore. I got it printed on a silver plate and gave it as a memento to every speaker at our meetings. I also gave it to our members on their birthdays and wedding anniversaries.

I served as the national coordinator and awards administrator for a national essay competition on The Four-Way Test held all over India, administered through Rotary clubs. This project, held for five years, was sponsored by District 6400 and the Rotary Club of Windsor, Canada.

Many times in my business, I made decisions that to an outsider might have looked unwise. There was an occasion when we could have bought a product without the taxes and sold it to make a handsome profit. When this proposal was brought to my attention, I put my foot down and said no. It failed The Four-Way Test. It was not fair to the tax authorities and to other dealers who did not have this advantage.

Another incident etched in my memory, even before joining Rotary, I was heading the special equipment division of a leading company in the Middle East. I was handling global tenders and multimillion-dollar deals. I was sitting with a top ranked bureaucrat from an important ministry who was a major customer, and he asked about the delivery of a piece of equipment that had been delayed due to a problem at the loading port. I was tempted to lie to avoid embarrassment, but working up my resolve, decided to tell him the true reason for the delay. Surprisingly, in my future dealings with him, he seemed to treat me with increased respect. Now I see this as validation of the principles behind The Four-Way Test.

The Four-Way Test is one of our great benefits as members of Rotary. It is a trustworthy ethical guide. And we have an opportunity to share it with eager young minds to the benefit of all.