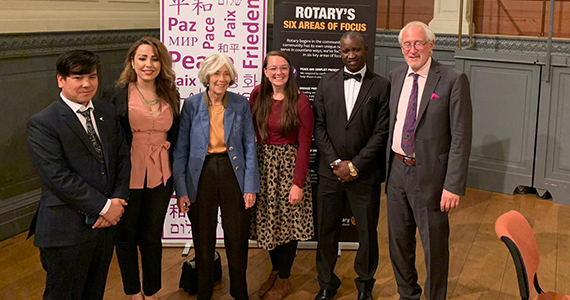 Rotary Peace Fellows with Lady Valerie Solti (third from left) and Orchestra Director Charles Kaye (right) at a special performance of The World Orchestra for Peace.

I recently had the privilege of hosting two Rotary Peace Fellows from Bradford University – David from The Gambia and Ghenwa from Syria. Ghenwa comes from southern Syria which has not had the destruction, bombing, and killing that has taken place in northern Syria. However, she cannot live in Syria for fear of reprisal or arrest because of her association with Rotary.

The government in Syria is suspicious of any nongovernmental organisations and organizations such as Rotary. Because of that and out of concern for her family who still live there, she and her husband must live outside Syria. These Peace Fellows are exceptional young people. I loved hosting them and felt so privileged to be in their company and to share their experiences.

The highlight of the weekend was the concert performed by The World Orchestra for Peace on 21 September, comprised of musicians from around the world who are the “crème de la crème” in their field. Many of the violinists are the leaders in very prestigious world orchestras. Between pieces of music, the Peace Fellows told their personal stories and why they wanted to be a Peace Fellow.

One moving story, which brought everyone to tears, was shared by Hassan. Hassan is from Afghanistan and has seen some horrible things. He talked about recently losing several of his friends, one of whom was beheaded. He also spoke of the bombing at a wedding in Kabul in which many were killed. Many of us recalled seeing it in the news. The reason for the bombing was that the Taliban prohibits music, and of course there is always much music at an Afghan wedding. It did not escape us that here we were at that very moment sitting in the magnificent historic Sheldonian Theatre listening to some superb musicians without any fear of bombing and death!!

Having the stories interspersed with music was awe inspiring. The orchestra had never heard of Rotary’s Peace Fellowship program, but Saturday brought together two international organisations working in their own unique ways to promote peace.

Suddenly, the orchestra could visualize an added meaning and dimension to their purpose. They were so impressed with the Peace Fellows that many have gone away hoping that there can be further collaboration. Lady Valerie Solti, Patron of the World Orchestra for Peace and wife of the orchestra’s founder Sir Georg Solti, was present. Very touched by the Peace Fellows, she has promised to be at their seminar at Bradford in October.

Twitter and Facebook are alight around the world with such glowing comments about the evening. We have gone global! I have never been so proud to be a Rotarian as I was that Saturday.