Editor’s note: World Homeless Day, 10 October, is an opportunity to educate people about homelessness and raise awareness in your community.

Spending the night under the stars sounds romantic. But for hundreds of thousands of Americans, it’s the exact opposite. It’s not a choice; it’s an unpleasant reality that can quickly become detrimental to one’s life. And it happens more often than most people with a roof over their heads might think – 553,742 people were homeless on a single night in 2017. Alarmed by the growing homeless population in our city, my club and I felt compelled to take action.

While Seattle is the 18th largest city in the U.S., it has the third largest homeless population. Reasons include gentrification, sky-high real estate prices, and the availability of great resources. But despite these resources, living on the city streets in miserable, unsanitary, and unsafe. 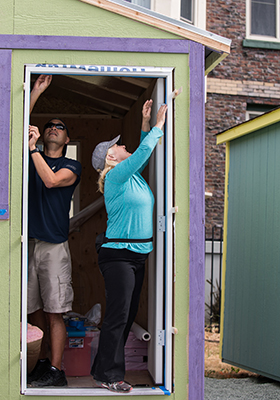 Rotary members in Seattle work on the door of a tiny house.

We first partnered with Operation Nightwatch, which feeds the homeless in Seattle, and began volunteering on a monthly basis. That encouraged several of our members to conduct further research, which resulted in writing a grant to construct tiny houses, defined by city building codes as one-story detached structures that are under 120 square feet.

Our club eventually settled on the ‘Housing First’ model as the best approach. And we found a project and partner we could believe in and fully support. The Tiny Houses Project, owned and operated by the Low Income Housing Institute (LIHI), provides a suitable, safe and humane route to transitional housing for the homeless in the state of Washington. It offers displaced men, women, and children tiny houses which provide immediate access to a better quality of life.

Through this project, people can start rebuilding their lives and eventually contribute to their community. For this reason, we formed a special partnership with LIHI, and committed to building 10 wooden transitional tiny houses that offer a safe community in which to live. Included with the cluster of homes are outreach facilities offering health and medical care, job training, employment, and friendship.

Funding for these transitional homes went to LIHI in November 2017. On two days in May, Rotarians from our club and District 5030, along with other local groups, constructed 30 tiny houses. Ten of these houses were paid for by a district grant originating with our club.

What began as a serious concern for a major challenge facing our community turned into a collaborative project with other humanitarians who shared our convictions. It proves that small steps can lead to big changes, if we take the time to learn and collaborate with others.

These tiny houses and their communities act as an important intermediate step for providing shelter for the homeless. We plan to continue to help rebuild the lives of those who are down on their luck, one tiny house at a time until we have reduced the homeless rate in Seattle. That’s what People of Action do.

Learn more about how Rotarians are People of Action.

5 thoughts on “Helping the homeless, one tiny house at a time”