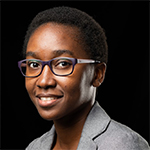 Had it not been for my friends Pablo Edu Nkene and Rosa Reyes Salomon Ehopi, I would have missed the opportunity to witness the important role education plays in people’s lives – people like myself. Pablo is a very good friend of mine who attended last’s year Mandela Washington Fellowship. One of the first things he did upon his return was talk to me about how amazing the program was and most importantly how it has changed his perspective of life.

By participating in this program, I have been able to realize how important the power of choice is. I saw how even people being helped at food banks and shelters here are given the opportunity to choose from among a limited selection of options. Many times, we expect those who are in need to accept anything we give them, because we just assume they are not entitled to make a choice. But by giving them the opportunity to choose, we empower them to have some control in their lives.

Something else that really caught my attention is the support children receive in order to carry out their dreams. Children from a very young age in the United States can enroll in specialized schools depending on what they hope to become in the future. They know the path they must follow in order to achieve their dreams, and in many cases they are able to achieve them.

Up until a few months ago, I had no idea that Rotary had clubs all over the world including in my country of Equatorial Guinea. It is strange because I am a young professional in the business world who is passionate about serving and giving back to my community. I have been volunteering for the past seven years. In 2017, I finally decided to start a club with my friends called Nosotros. We volunteer almost every weekend by spending time with kids in an orphanage or patients at a hospital in the capital Malabo, and also organize projects to clean public spaces.

When I arrived in the United States, I spent my first six weeks at Appalachian State University in Boone, North Carolina, and was invited to attend a meeting of a Rotary club in the area. Even though the club did not have a lot of young people, I felt very welcomed, and the members were very curious about my country, what I do, and the fellowship.

Before I came here, my impression of Rotary had been very different. I thought of it as an organization for a few elite elderly people in society. But now I know Rotary is for everyone who wants to make a change, no matter what size that change. It includes people of all ages and genders who are dedicated to impacting people’s lives in a positive way.

I would love to share all I have learned and seen here in the United States, because I now see that the change we want is within our power to bring about. I know I cannot speak to everyone in Equatorial Guinea, but at least I can share with those I come in contact with. And hopefully someday, my beautiful country can also be called a developed country.

2 thoughts on “Everybody deserves a choice”