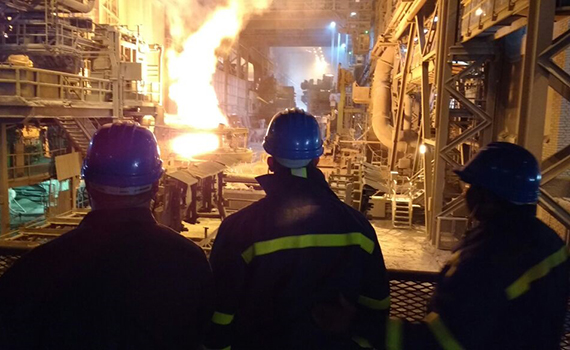 Firefighters from Argentina and Florida, USA, share techniques during an exchange sponsored by Rotarians in both countries.

By Celia Giay, past RI vice president and a member of the Rotary Club of Arrecifes, Buenos Aires, Argentina

The idea for our firefighter exchange was born when my club received a visit from local volunteer firefighters. Club members listened attentively as our guests explained their dream of continuing to learn better ways to protect their community, and on that very night we set a goal to organize an international exchange to make that possible.

The next day, I talked with our district governor, Osvaldo Lazzati, who immediately liked the idea, but we needed another district and country. So he got on the phone with Alan Cohn, the governor of District 6990 (Grand Bahamas, Florida, USA), who enthusiastically accepted the challenge. And the rest is history. 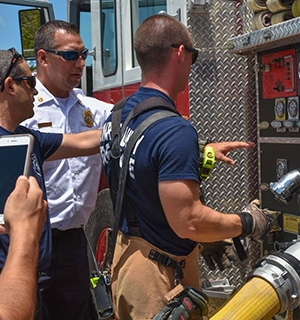 Firefighters in the US explain their equipment to their Argentinian counterparts.

District 4895, Buenos Aires, Argentina, sent six firefighters and a team leader to south Florida on 23 April. For two weeks, they were hosted by firefighters and Rotarians and ended their adventure by attending the District 6990 Conference in Key West, Florida. Since District 4895 was holding their district conference at the same time in Argentina, the two districts were able through teleconferencing to present at each other’s conferences.

Then on 14 May, six firefighters from Florida and a team leader visited Buenos Aires, Argentina, for two weeks, hosted by firefighters and Rotarians in our district.

The purpose of both exchanges was to share best practices in firefighting. Firefighters in Argentina are volunteers while firefighters in South Florida are paid professionals. The firefighters got to participate in each other’s training techniques and learn about use of fire equipment.

We had plenty of assistance planning this exchange from Governor Lazzati and our service project district committee chair Judith Figueroa. In Florida, Governor Cohn, regional Rotary Foundation coordinator Lee Phares and Rotarians Jesus Sanchez and Elihu Phares were instrumental in seeing this idea through.

Best of both models

We used a hybrid model drawing from both the Group Study Exchange concept and that of vocational training teams. The result was an intensive firefighting training and a social/cultural experience for all. The friendships that were developed between firefighters and Rotarians will last a lifetime.

Everyone involved believed we had truly met the firefighter’s initial dream. By allowing them to share their expertise, challenges, strengths, limitations, and find better solutions for safeguarding their communities, they were able to “Be the Inspiration” and “Make a Difference.”