When I first saw a story on BBC in the spring of 2016 about the Nakivale Refugee settlement, I didn’t give it much thought. It was distant to me. Somewhat coincidentally, I attended a “changemaker” event that November organized by the American Refugee Committee, where 13 youth from the Nakivale Refugee settlement were being honored for their project ideas to impact the refugee community.

Sam Owori (who passed away in July of 2017), was at the event as RI president-nominee and was so impressed by the enthusiasm and determination of these youth that he got the idea right at that moment of organizing them into a Rotaract club.

Together with Angela Eifert from the Rotary Club of Roseville, Minnesota, and staff at the American Refugee Committee, we took on the challenge. Both Angela and I began our Rotary journey as Rotaractors. And I saw the opportunity to impact and mentor youth who are critically in need.

I was even more encouraged by the zeal I saw in them. I must say, it was exciting to see young people who refused to be held back by their status as a refugee, but were determined to change their lives and serve their community. 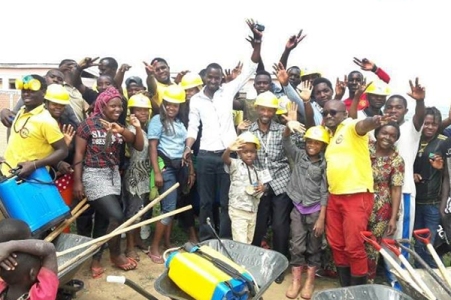 Members of the Nakivale Rotaract Club participate in a service project.

One young man who particularly stood out for his charisma and leadership skills was Paul Mushaho. Paul ended up playing a key role in mobilizing his peers and in June of 2017, with a membership of 54, the club was officially chartered. I was thrilled to personally present them with their certificate. It was truly a Rotary moment for me, because I have never heard of a Rotaract club in a refugee settlement before.

My goal during their first year was to ensure that they grew to understand the core values of Rotary and particularly how they can benefit from Rotaract as they work in their community. Members of the Rotary clubs of Kiwatule and Mbarara, Uganda, and Roseville, USA, have supported and mentored these youth in developing their leadership skills while participating in some of their projects.

The success of this club has energized me, and other Rotary members, to start planning other Rotaract clubs in refugee camps. I believe the Nakivale Rotaract Club could be an idea that spreads to other clubs in hard to serve areas, while also extending Rotary’s reach as these young adults eventually return to their home countries.

Read more about this club on Rotary.org

Editor’s note: This is the third in a series of posts celebrating Membership Month. A successful Rotaract club depends on a dedicated sponsor Rotary club. Learn more about starting a Rotaract club in the Rotaract Handbook.