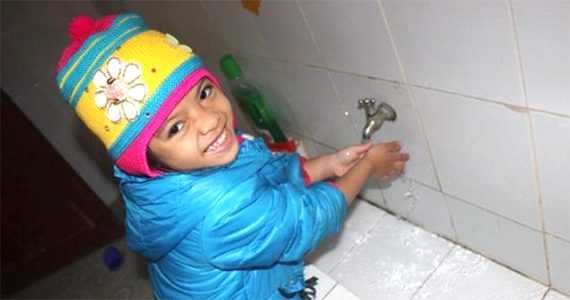 A young girl washes her hands in the new facilities.

For some of us, it might be hard to imagine life without clean water. We may have suffered the inconveniences of temporary water cuts due to breakdowns or repairs in the water network. And we may have felt frustration after working out at the fitness center if the shower was broken. But those are just minor inconveniences compared to what people in the Huong Nguyen commune live with. Until recently.

It takes a drive over many miles through tortuous and bumpy roads to reach Huong Nguyen commune. It is located in a very mountainous region, close to the Laos border, in the A Luoi District, Thua Thien Hue Province, one of the most affected areas during the Vietnam War. Through the assistance of a Rotary Foundation global grant, a project provided a water supply system and environmental sanitation benefitting 1,252 people in 316 households.

The project also enabled construction of 50 hygienic latrines. These play an essential role in keeping waste away from living spaces, which means less disease and better health for all the affected people.

It is expected that all these measures will have an important impact in the health of the inhabitants of the commune. But they are also expected to have other impacts. It will no longer be necessary to travel long distances to bring clean water home, saving time for the inhabitants of the commune, time that might be spent in other profitable tasks, increasing the economic prospects of the whole area.

It is difficult to describe the atmosphere in the training sessions where those living in the commune learn about the new facilities and are taught hygiene. The smiles on the faces of the attendees and the laughter of the boys and girls says much about the joy and happiness that Rotary has brought to this poor commune almost lost in the mountains of Vietnam.

1 thought on “Doing good in Vietnam”