Spelling out Rotaract with visiting Rotaractors in Sri Lanka.

Whenever I meet my mother’s close friends, whom we affectionately call aunties and uncles, their stories always begin with “during our time in Rotaract … ”

I didn’t fully understand and appreciate what Rotaract was all about until I found myself attending my first meeting of the Rotaract Club of Colombo, Sri Lanka, at age 23 to support the club president, my cousin Hussain Akbarally (my mother’s sister’s son), with an annual fundraiser. As the meeting progressed, I learned about the club’s long, proud heritage, and my family’s intertwined role in it.

Just a year after the first Rotaract club was chartered in North Carolina, Ruzly Hussain brought Rotaract to our paradise island of Sri Lanka in 1969. My mother, Nafeesa Amiruddeen became president of this club. And 30 years to the day later, I became a proud member. It turns out it was my Nana (mum’s dad), who was a founding member of the Rotary Club of Colombo-Midtown, and the one who passed down this tradition.

Fellowship has been the prevailing force that has kept my family glued to Rotaract (and Rotary) through all the years. The club creates opportunities to meet, interact, and work with like-minded people both in our own country and internationally. I experienced this first-hand when I served on the board as International Service Director for another of my cousins, Shiraz Akbarally, Hussain’s brother, during his year as club president.

As a young professional working in the Ceylon Tea Trade, Rotaract gives me the opportunity to meet, work with, and form friendships with diverse individuals from a variety of professions, backgrounds, and cultures, widening both my scope and horizon. 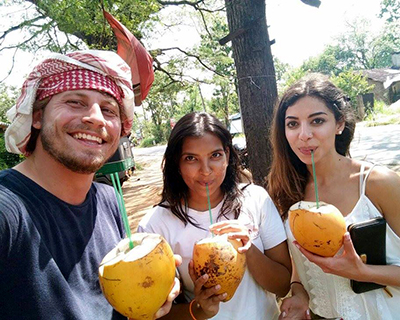 Jumana Amiruddeen, middle, with Rotaractors taking part in the Escape to Paradise roundtrip.

My role in the club not only helped further develop my organisational and event-planning skills, but also made the world seem a lot smaller through the connections I made in what I like to call the “Rotaract Global Network.”

One of our flagship service projects for the year is Escape To Paradise, a trip we sponsor to our island for Rotaractors from other places. This is how I began to meet Rotractors from all over the world. Despite our different cultures and languages, we all shared the same values which instantly connected us. In 2015, my cousin Shiraz, then club secretary Minal Cabraal, and I met up with Rotaractors from Amman West during a visit to Jordan and created an amazing chain of events that produced a ripple effect. I met Sandy Odeh, who took part in our Escape to Paradise trip in 2016. She was joined by Ania Grzywacz of Poland, who encouraged me to take part in the Poland Rotaract Round Trip that same year. There I met fellow tripper Julie Chu, who was promoting Interota 2017 in Taipei, Taiwan. And in Taipei, I met Cosmin Pitu from Germany, who is now taking part in the Escape to Paradise tour in 2018!

Jumana at the Escape to Paradise information table.

These friendships have given the Rotaract Club of Colombo and I the opportunity to be a part of many international projects, from fundraising for education, to donating books to a children’s school in the Ukraine, to exchanging culture boxes with Rotaractors from Jordan, Germany, and Poland.

I eventually passed on the reins of International Service director to yet another cousin, Amaar Adamaly, (mum’s brother’s son). For us, Rotaract truly is a family affair!

I thought I was making a decision to join. But in truth, the club is so intertwined with my family, it is like the path had already been chosen for me. Joining Rotaract is one of the best things that has happened to me!

World Rotaract Week is 12-18 March. Join the 50th anniversary celebration and read about Rotaract through the decades. Follow Jumana Amirudden on Instagram @jum_jum27

4 thoughts on “Rotaract runs in the family”