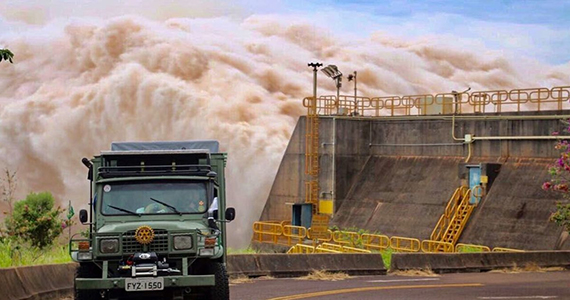 In front of the hydroelectric power plant in Foz do Iguaçu, Brazil. About 11,000 cubic meters of water pass over the dam a second.

Two brothers, a car, one important social cause, a lot of courage, and many adventures along the way. That’s how our Expedition “Me Leva Junto” (Take me with you) began in October 2015, now more commonly known as the “Hepatitis Zero Expedition.”

My brother José Eduardo and I completed the first stage of our expedition, the Americas, in December, traveling through 20 countries and visiting 274 cities on the American continent. All our efforts are volunteer; there is no sponsorship from any company or organization.

Fred Mesquita and his brother, José Eduardo, in Nicaragua preparing for a newspaper interview.

When we started our journey, we set a goal of carrying out hundreds of thousands of Hepatitis C exams and visiting all the world’s continents. Besides having a direct impact on more than 50,000 people, we never dreamed that we would lunch with a country’s president, swim with a whale shark, or be the guests of honor at a banquet with a homeless person who only had a mud hut to live in. Our experiences have also included difficulties like almost being kidnapped in Mexico and having our tent freeze and car break down due to extreme cold in Patagonia.

There are so many adventures and challenges that we have recorded in our virtual book; which narrates the twists and turns of our expedition. In Brazil, we performed approximately 10,000 rapid tests and diagnosed more than 100 hepatitis sufferers who had their lives saved when they were diagnosed and directed for treatment. Our aim is to bring knowledge and guidance to thousands of people worldwide who have hepatitis and have not been diagnosed. We have visited Rotary clubs throughout the Americas as well as meeting with health authorities and experts at universities and other locations.

You can support our effort by visiting our crowdfunding campaign. All of the proceeds of our virtual book go to supporting our expedition.