I was walking out of my accounting class this summer when I received a message from the dean of students asking if I would be willing to start a Rotaract club at the university for the fall semester. I knew nothing about Rotaract and very little about Rotary but Dean Gentry assured me he would be our club adviser and provide support, so I accepted. Sewanee does not have a plethora of clubs with the national or international recognition that Rotaract has, and I felt confident that students would be interested.

A week later, I met with Bill Davis, a local Rotarian who has orchestrated the effort to bring Rotaract to the university. Bill and I were determined to create a following for the club, so we spent countless time organizing, reviewing the Rotaract Handbook, and discussing how we were going to make it a successful club. I met with Katie Sneed, the president of the University of Tennessee-Chattanooga Rotaract Club, who graciously gave us advice. Her perspective and support has been crucial.

Initially, I advertised to students through the Activities Fair, to Greek Life organization, and any other student streams we could think of. I explained that Rotaract is an opportunity to create a network of connections and make a difference in the world. Pitching this in a positive light was critical because students will choose to invest their time where they receive the most value back. Therefore, I focused on the prominence and notoriety of Rotary and Rotaract, asking “Would you like to do good and make a difference within our community?” Students at Sewanee want to serve and help the community. 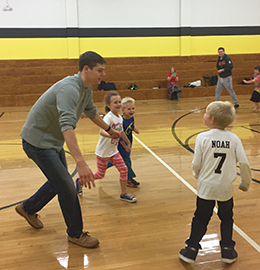 Club president Samuel Kern engages children in exercise during a visit by the Rotaract club.

After creating a viable student interest for the club, we held an information meeting and followed the Rotaract Handbook. Twenty-seven students attended our first meeting, and we felt there was enough support to move forward.

At an organization meeting I explained the structure of the club and asked for those interested in leading. Assembling the right leadership team was critical. I created nine positions adding on a Social Media Committee Chair and the Finance Committee Chair. These officers have been instrumental to our club’s success. Their efforts have allowed us to grow quickly and mobilize.

Perhaps the most important ingredient has been the support of Rotarians. Bill Davis, John Hill (President of the Monteagle-Sewanee Rotary Club), and Woody Deutsch have given their constant support, organizing the charter ceremony, and attending our meetings. Bill has supported me and been a great mentor throughout this semester. I have learned a lot about leadership, service, and life. He and the other Rotarians have been a great influence upon our Sewanee Rotaract Club.

We have held our charter ceremony, participated in service projects, received guest speakers, and are making an impact upon our community. Ultimately, the Sewanee Rotaract Club is here because of the students who make up the club. They are passionate about “making a difference,” and this mission and core value is what unites our club and allows it to succeed.

Take part in a livestreamed panel discussion Wednesday, 6 December at 2:05 CST on the State of Rotaract.

7 thoughts on “How we started a new Rotaract club”