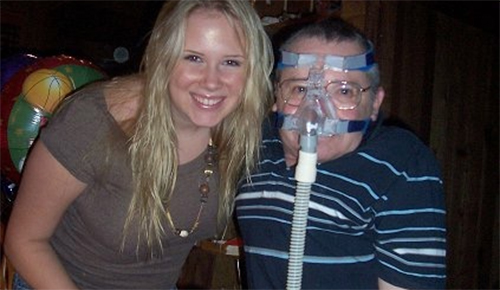 Michelle Provan and her dad, Robert, who died in 2006 from pulmonary complications stemming from postpolio syndrome.

During the 1950s, shortly after World War II, polio had a rampant outbreak in Chicago. I remember my dad, Robert Provan, telling the story of how he went to play at Evergreen Park, taking a sip of cool water from a drinking fountain, and believing that is where he caught the deadly disease at age five.

He was diagnosed with the worst type of polio. It instantly affected his entire body, and he was paralyzed from the neck down. He also spent time in an iron lung. My grandparents tried a couple of specialists to no avail. In fact, they were told to institutionalize him, a practice that was common during this time. They were told, “He is a burden to the family, and he belongs in an institute. Just let him die.”

Luckily, my grandparents searched even harder for someone to take on my father’s care, and they found Dr. Charles Pease at Chicago Children’s Memorial (now known as Ann & Robert H. Lurie Children’s Hospital). My father’s condition was grim, but Dr. Pease believed in an approach that had a zero tolerance for coddling. His goal for my dad was to make him independent and self-reliant. So, the surgeries began. For five years, my dad continued to fight the effects of the disease.

Though much of his early childhood was in a hospital, he made the most of his time—even sometimes causing mischief with other boys and innocently terrorizing the nurses. 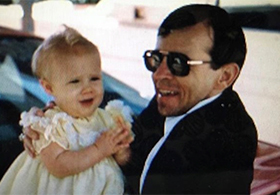 For five years, Dr. Pease did some incredible things. He was able to perform surgeries to help my dad. He used a muscle from my dad’s leg to pull his ribcage into alignment so he could breathe. He gained the ability to move, but then he lost ability in his left foot. So Dr. Pease transplanted muscles from his foot and ankle. His right leg was shorter than his left, so to stimulate growth he grafted a piece of ivory to the bone.

Closing in on age 10, the doctors were very concerned about my dad’s survival. They had given him only a year or two to live, even after all of the treatment. Dr. Pease discussed a risky operation in which he intended to fuse most of my dad’s vertebrae in order to secure his spine. After my grandparents approved of the operation, Dr. Pease asked my dad for his permission. He told my dad there was a 50/50 chance that the procedure would fail and kill him. My dad agreed, knowing at age 10, that he may never make it off the operating table. During the operation, my dad flat lined for a few minutes. They brought him back, and then finally, a breakthrough as the surgery was successful.

“We are made to care for one another. We fill our lives with meaning by caring for someone else. Love until it hurts.”

Dr. Pease didn’t stop innovative treatment until the day my dad walked out of the hospital. My dad lived an exceptionally successful life. He went through public school where he excelled and served as student body president for two years. He graduated from the University of Texas law school. 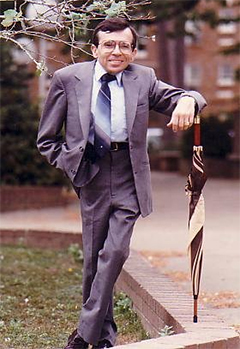 Robert J. Provan as an attorney. His lawsuit against HMOs on behalf of patients with disabilities was the first of its kind.

He became General Counsel of Stephen F Austin University, then General Counsel of the Texas State System, and an Assistant Attorney General of Texas. He eventually opened his own law firm in order to defend disabled patients and their doctors. He was the first lawyer to sue HMOs for denying care to sick patients in order to make a profit and he won. That case changed the way insurance companies managed their enrollees and saved hundreds, possibly thousands of lives.

Today, Bob Provan’s legacy lives on. His winning case is now studied at law schools including Harvard Law School. He was featured on the cover of Wall Street Journal and Austin American Statesman. A mini-documentary aired on A&E’s Investigative Reports about the case. Today, in Pflugerville, Texas, a school, Provan Opportunity Center, operates to serve children who need social, emotional, and academic support.

In his 40s, my dad was diagnosed with postpolio syndrome. That placed a long-term strain on his physical resilience and his battle to deal with the effects of polio as well as the strain of the law case. At age 61 he died from pulmonary complications, an effect of post-polio, on 6 July, 2006. He is buried under a large oak tree at Lindale City Cemetery.

Polio eradication is something I hope to see accomplished in my lifetime. For all of you who work toward this fight, keep fighting. The world needs you. And from the bottom of my heart, from someone who has seen the effects of polio first-hand, I thank you. My dad often said, “We are made to care for one another. We fill our lives with meaning by caring for someone else. Love until it hurts.”

You are fighters, and you are heroes – just like my dad.

Editor’s note: This is part of a series of posts from polio eradication volunteers, Rotary staff, and survivors in honor of World Polio Day 24 October. What is your club doing to observe the day? Learn what other clubs are doing, register your event, and tune in to our live streamed event 24 October.

7 thoughts on “My dad’s battle with polio”