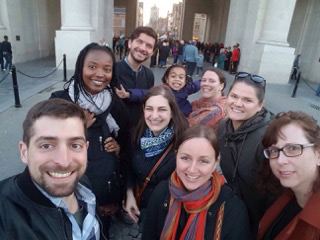 Rotary Peace Fellows from the University of Bradford visit World War I sites in France and Belgium.

Earlier this month, I took part in a tight, four-day trip to World War I battlefields and commemorative sites in France and Belgium with other Rotary Peace Fellows at the University of Bradford (including one Fellow’s sweet, energetic daughter!), host coordinators, and a few others connected to Rotary.

From the perspective of a Peace Fellow, it was interesting and, at times uncomfortable learning about the “Great War,” and how war is interpreted, commemorated, and, at times, glorified. Within the company of our group we had many moments of reflection alongside thought-provoking conversations about how war memorials and commemorations can be powerful sites of dialogue and reconciliation.

What does the site aim to do? Who is the intended audience? How is history portrayed? Whose story is being told? What voices may be left out? How does power play out in the initiation and maintenance of such sites? During the trip, and maybe even more so afterwards, there was space to ponder these questions, as well as honour what was lost. 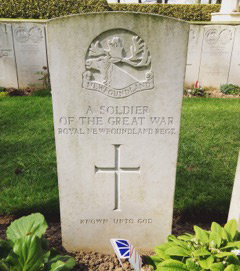 A memorial for a soldier from the Royal Newfoundland Regiment.

I’m from Newfoundland, an island on the east coast of Canada, thus there was a special aspect of the trip that resonated with me: Newfoundland Park in Beaumont-Hamel. On 1 July, 1916, the “Blue Puttees,” the Royal Newfoundland Regiment, fought in the Battle of the Somme. That morning, the battalion was almost entirely wiped out; only 10 percent of troops were available for roll call the next morning. Visiting Newfoundland Park was a powerful and emotional moment for me and I’m grateful to have been able to visit.

Though discussion of the war was a heavy topic, we also carved out space for fellowship, fun, and bonding. Sharing meals, conversations, games and many hours in a van together allowed us to make some special memories we won’t soon forget.

Some of the best moments of the days included getting to know the Rotarians traveling with us and the Peace Fellow’s daughter who allowed us to indulge our playful sides. I know that each of us are grateful to trip organizer Ken Robertshaw for his enthusiasm, care and attention to detail.

2 thoughts on “Trip to World War I sites provokes thoughts of war, peace”