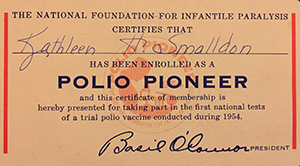 Since joining Rotary in 2011, I have been impressed by its commitment to eradicating polio from the world through its End Polio Now campaign. That said, polio never resonated with me as a significant cause.

I was generally aware of polio’s impact throughout history: Franklin D. Roosevelt and the March of Dimes, iron lungs, and the polio panic here in the United States. But it wasn’t personal to me; it was something of the previous generation, abstract, to which I had no emotional investment.

And then my mom went and showed me how wrong I was.

A couple of weeks ago she handed me a small piece of cardboard and said “Since you’re in Rotary and its always talking about polio, I thought you might want this.” The cardboard was my mother’s “Polio Pioneer” card, marking her as one of hundreds of thousands of children throughout the United States who, in the summer of 1954, participated in the largest clinical trial ever conducted.

For most of us born after 1954, I suspect the idea of hundreds of thousands of parents across the nation volunteering their children to test an unproven vaccine for polio is a bit mind blowing. After all, today when we hear about vaccines it is usually in the context of parents asserting the right to not vaccinate their children due to personal or religious beliefs. Yet imagine a public so overwhelmingly fearful of a disease that it offered up its children to try to stop it. Little wonder so many born before 1954 understand the need to eradicate polio, and why Rotary has embraced this as its signature cause.

Today, parents worldwide offer up their children to be vaccinated not just out of fear of polio, but with the hope that the vaccine tested by the “Polio Pioneers” in 1954 will save their children today, allowing future generations to live ignorant of polio’s long shadow. And through Rotary, every dollar contributed, every mile walked, and every teddy bear purchased goes to support that hope.

As with anything, the cause or position to which we have a personal commitment is often the one we support most strongly. Personal connections make abstract issues into important concerns, but we cannot limit ourselves to trying to understand or supporting only those concerns to which we have a connection. The key, it seems, to understanding other’s concerns and (equally importantly) helping others understand yours is to tell stories.* It is not enough to share objective data or historical fact – both are important, but not entirely compelling on their own. Advocacy, through story-telling, can bridge the gap between data and engagement.

So with this, I share a story I never knew I had. Thanks to my mom, I better understand why Rotary is so focused on polio and why so many see its eradication as being so important. This further cements my admiration of, and commitment to, Rotary and the great Rotarians worldwide who work so diligently to make our world a better place.

Learn how you can help end polio

*Grateful acknowledgment to Shirley-Pat Chamberlain, a fellow Rotarian from British Columbia, who presented this thesis at the 2017 NorthEast PETS.

3 thoughts on “My mom was a Polio Pioneer”