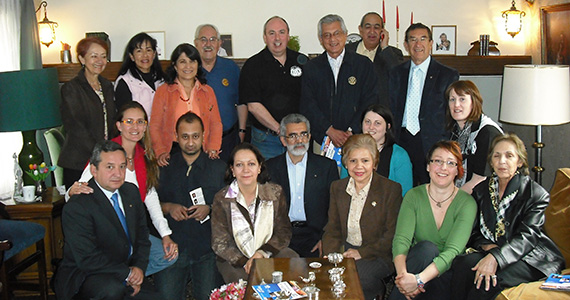 Ian Geddes (back row fifth from left), members of the exchange team, and their Colombian hosts.

By Ian W. Geddes, past governor of District 1020 (Scotland)

I have many Rotary stories to tell, but this one happened in Colombia. I was chosen by my district to lead a Group Study Exchange team to Bogota. As a Spanish teacher in Scotland, my dream had long been to travel to South America. Having been chosen as leader and then having negotiated a sabbatical from my school, my team and I finally set off for Colombia.

One week into the trip, the day after we had visited the fabled El Dorado, I fell ill. At first I thought it was just altitude sickness as we traveled along the Andes at 11,000 feet above sea-level. But no, it turned out to be appendicitis. 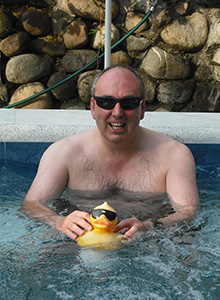 Geddes recovering from the appendectomy.

As the surgeon went off to prepare for the operation, I broke down completely. End of dream – three to four weeks convalescence instead of exploring Colombia. Just then the wife of the district governor walked in and said she would arrange to get me back to Bogota – some four hours away – where I would get keyhole (minimally invasive) surgery and be back on my feet in days instead of weeks.

When we arrived at 11 p.m. at the hospital there were a lot of Rotarians there – my host, the Colombian GSE team leader, his wife who had been a doctor in the hospital. They were all waiting for me and they were busy networking to get me the best and quickest help available.

A fellow training leader whom I had met some months earlier at Rotary’s annual training event in San Diego, USA, was a consultant at the hospital. I stood up from the wheelchair and we hugged and said hello. He then slid his hand along my waist as I searched my brain for the right words in Spanish to ask him if this was some quaint Colombian greeting. But he simply replied that as a doctor he was checking for peritonitis! That then for me was when vocation, fellowship, networking, service above self and dare I say, love, all came together.

Some people leave their heart in San Francisco – I left my appendix in Bogota!

3 thoughts on “The day Rotarians saved my exchange”