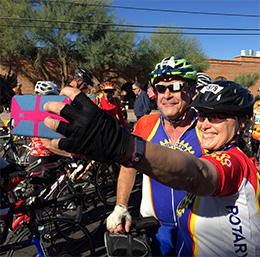 In many ways, the 2015 Ride to End Polio by Rotarians in District 5500 was “The Big Ride.” Maybe it’s that Rotary members’ commitment grows each year. Maybe it’s just that the fellowship, fun, fitness, and collaborative spirit bring out the best in each of us. Whatever it is, the numbers say that this, the sixth year of our event, was the biggest in every way.

Although overall ridership in El Tour de
Tucson was down about 7,000 cyclists this year, Rotary fielded almost 100, a record for our event. This was also the first year that we included a “virtual ride,” inviting people to support us by riding stationary bicycles at their homes or gyms. We registered 17 teams, totaling more than 250 indoor cyclists. Our celebration dinner on the eve of the ride hosted just under 100 cyclists, friends, family, and supporters. And most important, it appears that we once again we have exceeded the amount we raised the previous year.

It takes a while to gather the numbers for all of the funds raised. But as of today, we have raised more than $13 million after donations were matched 2-to-1 by the Bill & Melinda Gates Foundation. This is considerably more than last year, and the number may still increase as we compute the final tally of giving. As it stands now, our six-year fundraising effort has exceeded $20 million. Not bad for a bike ride.

Three things have made it great
As I said at our dinner, three things have made this ride what it has become. The first — and the reason I love Rotary — is that one man, Michael Harris, member and president-elect of the Rotary Club of Tucson (Casas Adobes), had an idea that he stuck with for years until it bore fruit. His idea was that PolioPlus would join the ranks of El Tour de Tucson’s beneficiaries (that’s the term given to nonprofits that use the ride to raise funds). Mike passed away four years ago, and we carry on in his memory.

Second, Matt Blair, a member of the Rotary Club of Tucson, designed a cycling kit five years ago that has become ubiquitous and sought after by many. We sent a shipment of more than 200 jerseys to Nigeria in 2012 for a cycling event there. It has become an international symbol of our effort.

And third, Rotary International has fielded a staff cycling team that has taken our fundraising efforts to heights we never imagined.

For me, this ride is the epitome of service. I can never avoid tears as I cross the finish line. After all the dinners, planning, problems, and logistics, it comes down to a bike ride. When I feel tired, when my legs hurt, when I wonder if I can finish, I envision the kids who will walk because we are riding. And I kindly say to myself, “Just shut up and pedal.”

2 thoughts on “The Big Ride”