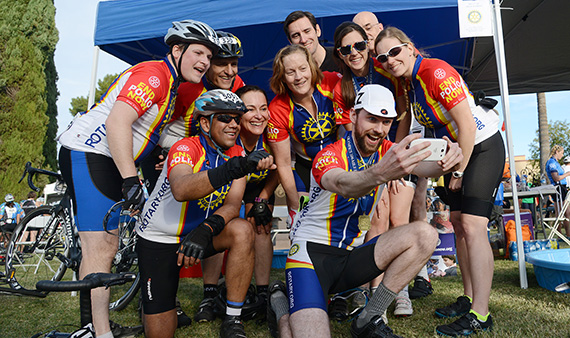 On 21 November, Rotary staff members and I will join Arizona Rotary members to bike up to 104 miles in El Tour de Tucson to raise funds for polio eradication.

The event is one of the top cycling events in the U.S., attracting more than 9,000 cyclists each year. We are aiming to raise $3.4 million, which will be tripled by the Bill & Melinda Gates Foundation for a total of more than $10 million for the fight to end polio.

We recently marked one year without polio in Africa. While this progress is momentous, we haven’t finished the job of eradicating polio yet. Now, more than ever, we need to redouble our efforts to help Pakistan and Afghanistan, and retain strong immunization coverage globally.

Meet the team. Learn more about each team member, follow them as they train, and add your support by donating to their ride. Team members will be sharing their training experiences here on our blog as the event draws near.

Would you like to join the team? Take part in the Indoor Ride to End Polio! Ride a stationary bike at your local gym or at home any time from 14-21 November. Register today or make a contribution to help Rotary create a polio-free world.

Naish is a Member Benefits program manager in Rotary’s Polio Development Partnerships. “First and foremost, my two first cousins in India contracted polio and passed away before adulthood. Along with my brother and sister, I was fortunate to be born here in Chicago so that we got the polio vaccine that my cousins never did. Thus, I am passionate about doing whatever I can to help eradicate this disease.”

Norah is a Global Events learning specialist, focusing on the Rotary Convention. She has been with Rotary for nearly 11 years. “As long as I’ve been riding, I’ve been raising funds too. From pedaling around my hometown of Galena, Illinois, for children’s cancer research when I was nine, to raising $2,500 and riding from Minneapolis to Chicago in the Heartland AIDS Ride. I look forward to cycling for a new cause this year.”

Jean is the supervisor of Rotary’s Global Events. As a kid, she knew she wanted to make a difference. Whether she was collecting pledges for the American Heart Association or carrying a fish food jar to collect nickels for the American Cancer Society, her desire to give to others came naturally. Today, Miles to End Polio is her way to support the fight to end polio and show the world that nothing can stop a movement like ours.

Scott is a Procurement Services manager and has worked for Rotary four years. “As a child, I vividly remember when people were really scared of polio. Pools closed and kids stayed home — one of my classmates had the disease. Today, the path is clear. We have to carry on with the fight, or it could return. It is to the men and women of Rotary, their fight, and particularly my club (Rotary Club of Glenview-Sunrise) that I will dedicate my ride.”

Debra is a senior regional Major Gifts officer based in Orlando, Florida, USA, and has worked at Rotary for over six years. Participating in Miles to End Polio is her way to honor all the Rotary members who have generously supported PolioPlus. And riding alongside her colleagues will allow her to combine her two greatest passions, fitness and Rotary, to raise funds in support of a polio-free world.

Lindsay is a Youth Exchange senior specialist. Her love of biking flourished when she moved to Chicago and bought a bike from a shop that supports at-risk youth through its earn-a-bike summer program.

Kristin is the manager of Rotary Service Connections. A member of the Rotary Club of Evanston Lighthouse and an avid cyclist, Kristin was the Miles to End Polio team captain last year and raised $4,000 to support the campaign.

5 thoughts on “Meet the Miles to End polio team”