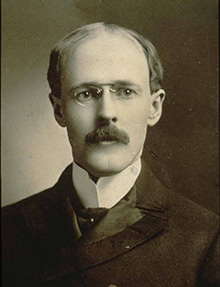 Paul Harris, soon after he started practicing law in Chicago in 1896.

In My Road to Rotary, Paul Harris recalled how his longing for friendship like that he had known in Vermont was one of his inspirations for founding Rotary in 1905. But in 1935, in This Rotarian Age, he wrote of the need for Rotary, from a wider perspective:

“It is conceivable that Rotary might have been born under sunnier skies, in a climate more equable, and in a city of mental composure; but many will contend that there could have been no more favorable birthplace for Rotary than paradoxical Chicago, where the battle for civic righteousness was being so fiercely waged.”

Harris moved to Chicago in 1896, and found it a stark contrast to what he had experienced in his youth in Vermont. In This Rotarian Age, he recalls Chicago as a city with poor sanitation, harsh working conditions, corrupt politicians, and economic hardships—“business was in a bad way” and “community spirit was at a low ebb.” Yet amidst the corruption and pollution, there were “hundreds of good deeds, unheralded and unknown.” Harris includes the recovery from the great Chicago fire of 1871, the creation of Hull House in 1889, and the founding of many universities and museums, as examples of the enthusiasm and determination of community leaders to do good in Chicago.

Today, Rotarians remain committed to doing good in their own cities and around the world. In the comments section below, celebrate Rotary’s 110th anniversary by sharing how your club is taking action for good. View a gallery of how clubs are celebrating.

3 thoughts on “Paul Harris on the need for Rotary”