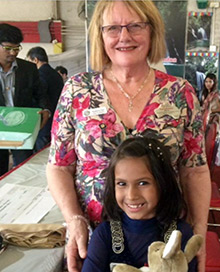 Susanne Rea and a friend during her visit to India.

By Susanne Rea, past president of the Rotary Club of Cairns Sunrise, Queensland, Australia

I was four-years-old when I contracted polio. I was fortunate to have made a complete recovery, but defeating polio has remained personal for me. I am also proud to be an Aussie. You can bet I was cheering loudly during the 2014 Rotary International Convention in Sydney when our Prime Minister, Tony Abbott, announced a pledge of $100 million over five years to help eradicate polio.

On Australia Day (26 January), I reflected on the significant contribution Australians have had on polio eradication. Past RI President Clem Renouf (1978-79) had the vision to involve Rotary in ridding the world of this crippling disease. Rotary member Jenny Horton has spent her life on the front lines, immunizing children against polio in endemic countries.

I am trying to do my part. As my district’s polio chair, I dreamed up the World’s Greatest Meal. Partnering with my friend Mukesh Malhotra, a past district leader in the United Kingdom, we pulled together a team of talented individuals who have harnessed the power of social media to encourage clubs and individuals to hold their own meal events, and donate the proceeds to PolioPlus.

In 2014, Rotary members through the World’s Greatest Meal raised enough money to vaccinate nearly four million children against polio. I have been moved by the variety and creativity of ideas, from a simple gathering of members over coffee to an amazing auction of Pele soccer memorabilia in Brazil.

I recently accepted an invitation to step out from behind Facebook into the real world, and promote our concept in person in India. In New Dehli, I found a cacophony of noise, but also serious young Rotary members excited by the opportunity to serve. In Mumbai, I met and enjoyed support from past RI President Kalyan Banerjee and past Rotary Foundation Trustee Ashok Mahajan. In District 2980, I toured 91 clubs, and that was just half the district!

I am now hooked. I am booked on an eight-country tour, which will see me returning to India in February, assisting with a Presidents Elect Training seminar in Dubai and Austria, floating down the Nile and visiting pyramids in Egypt, attending district conferences in the United States and Canada, and embarking on a magical mystery tour of England. All this is possible thanks to our wonderful team of 40 volunteers, six who work daily on the effort.

The beauty of our idea is its simplicity. Anyone and everyone can participate. Just plan an event and visit our website to register it with our Before Event form. Hold the event, take pictures, send the money to The Rotary Foundation for polio eradication, and return to our website and fill out the After Event form to add your results to our global tally. We even have a “how to” video that explains the whole process. You can follow us on Facebook or on Twitter at either @WGmeal or @wgmealsusanne.

Has the effort been scary and lonely? At times, yes. I am seriously out there. But this grandmother would not change a moment, and I consider myself one of the luckiest district polio chairs in the world.

13 thoughts on “The amazing role of Australians in eradicating polio”