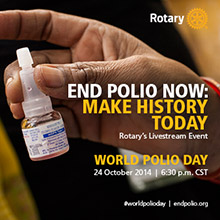 Join us in making history. When we finally rid the world of polio, it will only be the second time that a human disease has been eradicated (the first being smallpox). And we are “this close” to ending polio. Here are five easy ways you can get involved for World Polio Day, 24 October.

Join the fight to end polio on World Polio Day