Victoria Alvarez and other youth exchange students during their trip to the West Coast of the United States.

By Victoria Alvarez, a Rotary Youth Exchange student from Argentina to the United States

Most of you have probably heard of Rotary Youth Exchange, and maybe some of you have even been involved with the program. I recently completed my exchange year in the United States, and wanted to share the perspective of someone who has just taken part in one.

I come from Argentina, a little country on the edge of South America that you may have heard of recently because of the World Cup. It is in many ways very different from the United States. In signing up for an exchange to America, I stepped out alone into a culture unlike any I had experienced, in an unfamiliar environment, in a house I did not know, to live with people I did not know. Leaving behind family, friends, and most of what was familiar. 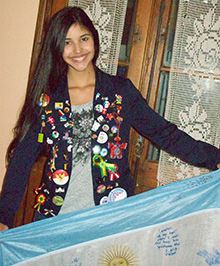 And despite all that, or maybe because of it, this year has opened my eyes and helped me grow as a person far more than any previous year in my life. How many teenagers can say they helped other Rotary members with a Rotary Youth Leadership Awards (RYLA) event, taking part in planning and learning leadership skills alongside other young adults? Or how many teenagers can say they are not from one country but two? That they have learned to appreciate the beauty in simple things? That money can never compare with love? And that hard work can make all the difference and give you more than you could ever ask through the joy that comes from helping others and doing good in the world?

These are some of the valuable things I learned during my exchange. I have learned there’s more than one way to do things, that things are not always black and white. Humans are the same everywhere, we just do thing differently and speak different languages. On the inside, at the heart level, we are all the same.

I can honestly say my exchange assisted me in differentiating right from wrong. But more than that, I can see that different is not always wrong, it is just different.

I built friends over a period of a year, and sometimes even in the course of a single week — friendships that I hope will last a lifetime.

During my stay in the U.S., I took part in a trip to the West Coast with other exchange student from all over the world. I am hoping to be able to reunite with some of them during Rotary’s International Convention in São Paulo in 2015.

Finally, I say thank you Rotary, and all who support the Youth Exchange program, for this awesome experience, one that you give to more than 3,000 youth a year.