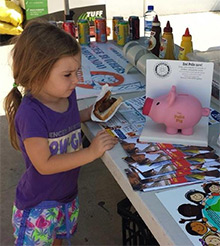 By Susanne Rea, past president of the Rotary Club of Cairns Sunrise, Queensland, Australia

I was day dreaming on the couch one day after taking a new position as polio chair for my Rotary District, 9550 (Australia), when an idea hit me.

What if we held a social media driven event similar to the Rotary Global Swimarathon, only made it about meals and eating! The World’s Greatest Meal. I had worked with Paul Wilson on his excellent Facebook promotion of the swimming event, and was very impressed with what he and supporting Rotary members were able to accomplish for polio eradication.

So I contacted my friend, Mukesh Malhotra, a past district governor in District 1140 (England), and met with him in London. Our clubs, Hounslow and Cairns Sunrise, agreed to a joint project. We launched a Rotary group. We worked with Howard Tong, another past district governor from New Zealand, to select suitable images for our campaign.

Malhotra began frequently posting on social media, and worked with Allan Berry to produce a printed leaflet which we handed out during the RIBI Assembly. The aim was to involve as many clubs as possible to organize a World’s Greatest Meal event on or around 23 February to celebrate Rotary’s anniversary.

We have succeeded in raising more than $600,000, and are now targeting $1 million. Social media has made this all possible.

As money started flowing in, it became apparent that I would not be able to manage this campaign just by using my iPad. Paul Wilson stepped in with a spreadsheet, and I reached out to my Facebook friend Scott Rossi, a Rotary member from North Carolina, USA, for help. At the peak of registrations prior to Rotary’s anniversary, it became an almost around the clock commitment through Facebook and email. This fortunately settled down after the anniversary, and now our main work has been following up on events that were held but not yet reported.

We encourage you and your club to continue holding events at any time. Malhotra has identified World Polio Day, 24 October, as another significant date to organize World’s Greatest Meal events around, as well as Rotary’s anniversary in 2015.

To date, mostly English speaking countries have been involved, which reflects our Facebook friends list. But we have a website to reach a wider audience, so our 300 events could be just the tip of the iceberg.

So what, you ask, is our basic aim? Raising money and awareness for polio eradication. Through this campaign, we have succeeded in raising more than $600,000, and are now targeting $1 million. A nice bonus has been seeing the variety of ideas clubs have come up with, some beyond our wildest dreams.

Social media has made this all possible, and it is free! My District Governor Tony Goddard has helped promote the idea through his fellow governors in Australia, and Alex Casteleiro, a Rotary member in Spain, has launched a website for our campaign that’s multilingual.

So join us and help us End Polio Now.

15 thoughts on “Funding a million polio vaccines through social media”