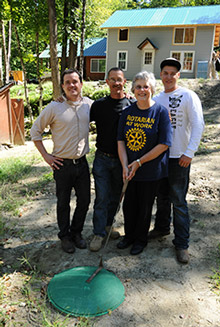 Rotary members in the New England region of the United States are providing long-term recovery from Tropical Storm Irene, with the help of Rotarians around the globe. Here’s one story of the difference we are making.

Irene, a large and destructive tropical cyclone, affected much of the Caribbean and East Coast of the United States during late August 2011. In Vermont, Irene flooded most of the state’s rivers and streams and in many places stripped away the earth itself, leaving fields of stone and boulders where lush crops and gardens once stood. Hundreds of homes and businesses were destroyed and thousands badly damaged.

Many clubs were involved in the cleanup, and we received a grant from The Rotary Foundation to fund long-term recovery efforts. One of the beneficiaries was a 47-year-old U.S. veteran who had served in Iraq and Afghanistan, and his son, a disabled veteran from the war in Afghanistan.

When Vermonters needed help the most, Rotarians answered the call here at home, not just neighbors helping neighbors, but Rotarians from all over the world helping Vermonters.

In the months before the storm, the father and son had moved to a home in Marlboro, Vermont, about two miles up a long, narrow, beautifully wooded road. Unfortunately, a beaver pond, which was holding back large volumes of water uphill, was breeched during Irene, sending torrents of water down the hill behind and around their home. Half the home was washed away.

“I lived in Florida so when I heard about a hurricane in Vermont, I thought how bad could it be?” the father said. “Well, I have never seen anything like it. It was wild water coming from everywhere.”

They were determined to rebuild on their land, but it was clear it was going to take more than just the work of volunteers. The section had been knocked clear off the foundation and they needed professional work to avoid further damage. Since they were rebuilding, and intended to live in the residence more than 60 days a year, the zoning board ruled they would need to add a septic system. We used a portion of our recovery grant to pay for the septic system. The rebuilt home has given these two veterans a base from which to seek stability and establish a new sense of “normal.”

This is only one of many amazing stories that came out of our grant. We also helped a 40-year-old single mother rebuild on her property and a retired childcare worker replace her damaged mobile home. Our efforts would not have been possible without the generosity of Rotary members from Taiwan, South Africa, England, Canada, and the United States. The Rotary Club of Sherbrooke, Quebec, served as our international partner for the grant.

U.S. Senator Patrick Leahy of Vermont had this to say. “Thousands call themselves Rotarians, giving time, money, and energy to causes across the globe. When Vermonters needed help the most, Rotarians answered the call here at home, not just neighbors helping neighbors, but Rotarians from all over the world helping Vermonters.”

This is a powerful witness to how Rotary brings leaders from around the world together to make positive change.

5 thoughts on “Recovering from Tropical Storm Irene in Vermont”