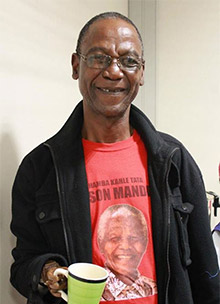 Samuel shows off the prosthetic hand he received from Rotary members. Photo by Tamika Doubell

By Tamika Doubell, model, actress, and an ambassador for Brooklyn Fashion Week

Thanks to my family’s involvement with Rotary, I’m never short of a community project to get involved with. My mother is the assistant governor for District 9370 (South Africa) and I’m proud to be associated with Rotary through projects of the Rotary Club of Algoa Bay in Nelson Mandela Bay.

Recently Rotary initiated three days of free healthcare to communities across South Africa through the Rotary Family Health Days, sponsored by Rotarians For Family Health and Aids Prevention. I covered social media, public relations, and marketing for the event in the Eastern Province. I shot several photos that I submitted to Rotary’s photo contest on Instagram. One in particular spoke to my heart — a photo of a man named Samuel from New Brighton township here in Nelson Mandela Bay.

Rotary is about teamwork, human rights, making a difference, and most importantly giving people back their dignity and self-respect.

Samuel was in his shack listening to the radio when he heard an interview about the health days. Leaders from the Rotary Club of San Rafael Harbour in San Francisco, USA, had flown in especially to take part and hand out prosthetic hands. Samuel happened to need one. He gathered up some coins, got in a taxi and made his way to the Nelson Mandela Bay Stadium where he received immediate attention and was fitted with a new hand.

For the first time since 1982, he held a cup of coffee in his dominant hand. He was beaming from ear to ear and it brought tears to our eyes and to his. Because of the collaborative effort of all Rotary members at the stadium when he arrived (near closing time!) to work speedily and effectively to give him his hand, he was full of a hope and joy he hadn’t experienced in over 30 years, not since losing his hand during Apartheid.

Rotary is about teamwork, human rights, making a difference and – most importantly — giving people back their dignity and self-respect. Nelson Mandela believed in this too. Rotarians in Nelson Mandela Bay did just that every day during the three-day initiative. Because of it, we are all Rotary “heroes” in my eyes.