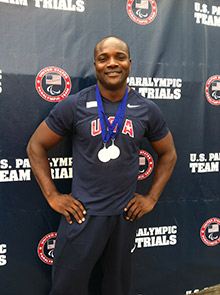 Dennis Ogbe with two gold medals during the 2012 US National Trials in Indianapolis, Indiana.

Dennis Ogbe, a Paralympic athlete from Louisville, Kentucky, USA, contracted polio as a child in Nigeria, while being treated for malaria. He eventually regained full use of his right leg, and began to compete in track and field.

As an athlete, I enjoy competition – but there is a battle happening off the field that is more important: the fight to end polio.

This fight is personal to me. I grew up in Nigeria, where I contracted polio at the age of 3. It was tough being the only kid on the playground in a wheelchair. For years I watched the other kids play, and when I tried to participate, they moved away from me.

Thanks to the encouragement of my father, I persevered. After a lot of hard work and practice, I eventually regained full mobility in my right leg and have gone on to compete in track and field in the Paralympics.

No child should have to go through what I did, especially when we have a vaccine to prevent it. Yet today, polio continues to cripple children in some parts of the world.

There is good news. Polio is more than 99 percent eliminated worldwide. In 1988, 125 countries were fighting polio, and more than 350,000 children contracted the disease each year. Today, polio remains endemic in just three countries: Nigeria, Pakistan, and Afghanistan. As we commemorate World Polio Day this year, eradication is within reach.

This progress did not happen by accident. It happened because the global community launched an unprecedented effort called the Global Polio Eradication Initiative, a partnership that includes the World Health Organization, Rotary International, the U.S. Centers for Disease Control and Prevention, UNICEF and the Bill & Melinda Gates Foundation. Thanks to this initiative and the work of many others, we are closer than ever to shutting the door on polio.

But we can’t stop now. The last percent is always the toughest, and if we don’t finish the job, polio could return with a vengeance. According to WHO, if we don’t end polio now, more than 10 million children under the age of 5 could be paralyzed by the disease in the next 40 years.

That’s a risk too big to take. We owe it to our own children – and to all children –  to seize this moment and end this disabling disease. Polio anywhere is a threat to children everywhere.

Our progress to date shows that when the world acts, we can achieve big things. That’s why world leaders came together earlier this year at the United Nations to reaffirm their commitment to ending polio and to issue an urgent call to fill a funding gap that threatens to undo the progress that has been made.

UNICEF and others are doing amazing work delivering polio immunizations, including in hard-to-reach places where the fight against polio will be won or lost. They need our support.

We have a once-in-a-generation opportunity to make history and finally eradicate polio from our planet. Each of us can make a difference this World Polio Day.

To this very day, my mother gets tears in her eyes when she describes the moment she found out that I was paralyzed. Together, we can wipe out polio and ensure that one day no parent has to share that same fate.

Adapted with permission from a guest essay Ogbe wrote for CNN Health. This is the latest in a series of stories from polio survivors, experts, and volunteers working alongside us to eradicate polio, in honor of World Polio Day 24 October. Find out how you can make a difference by: