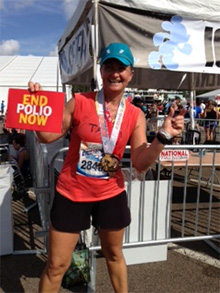 Tanya Wolff at the end of Disney’s marathon-and-a-half.

By Tanya F. Wolff, past governor of District 6330 in Ontario, Canada

I am not a runner. I can jog. I can walk and I can hike. I do these things for those in the world who cannot.

The PolioPlus program was already in effect when I joined Rotary in 1992. Seeing as I have travelitis (the need to travel constantly), the idea of traveling to another part of the world was a Rotary opportunity that I could not pass up.

As a child, I didn’t know anyone affected by polio. It just didn’t exist in my world. But my world has become bigger since I joined Rotary. In the remotest parts of India, Mali, Niger, Egypt, Benin and Nepal, I met thousands who have been touched by this disease.

In 2010, I decided to run my first marathon for PolioPlus, and I couldn’t think of a better place than in Chicago, the birthplace of Rotary. The following year, I joined the Rotary Club of New York’s marathon team for the NYC marathon. Earlier this year I tackled Disney’s marathon-and-a-half, called the “Goofy.” Which it was!

Marathons are like having children. The first time, you say “never again.” But a few weeks or months later you might say “that wasn’t so bad, maybe one more.” I’ve had three children and “run” three marathons.

I don’t plan to have more children myself, but I will keep chasing that finish line until we have fulfilled our promise to the children of the world.

Tanya will be running in the Miami Marathon on 2 February, 2014. You can support Tanya’s run for polio, or if you are a Rotary member contribute directly to End Polio Now and let Tanya know at tanya@rotary6330.org. Your contributions will be matched double by the Bill & Melinda Gates Foundation, increasing the impact of your giving to eradicate this disease.

Learn more ways you can help:

8 thoughts on “Running the distance for polio eradication”