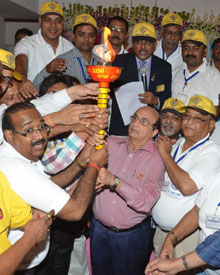 Rotarians in India join in passing one of the two torches for polio eradication.

By Nilanjan Dutta, past president of the Rotary Club of Ramgarh, Jharkhand, India

From July to December of last year, Rotarians in District 3250 (Bihar and Jharkhand, India) set two torches in motion, one to the northern clubs in our district and the other to the southern clubs, under the direction of our district governor, Rakesh Prasad. The polio eradication awareness torches were accompanied wherever they went by a week of celebrations and rallies raising awareness for polio eradication.

We undertook this district project with a couple goals in mind; to celebrate India being polio-free, to avoid complacency in the effort to eradicate polio from the world, and to mark the 50th anniversary of the Rotary Club of Ramgarh.

The variety of events during this six months was amazing: school children took part in speech, debate, and painting competitions; people joined together in any number of outdoor rallies; Rotarians took to the airwaves to share the end polio message; polio corrective surgeries were performed at medical facilities to coincide with the torch’s arrival; and the “flame” was passed through countless schools and clubs.

Children help spell out End Polio Now during a rally sponsored by the Rotary Club of Bhurkunda.

By the time the two torches reunited at the district conference 21 December, we had raised about US$4,000 for the polio eradication effort. The torches traveled more than 3,000 kilometers, with 52 clubs taking part.

The project had a profound impact on many of the participants. Here’s what some of them had to say.

“After receiving the polio flame, we felt elated and privileged, It was a feeling that can never be described in words. A simple act of holding the flame places you in the company of legends who have put their effort into removing this dreaded disease from the world,” Supriyo Sengupta, president of the Rotary Club of Chanakya, Bihar.

“What an incredible journey it has been for all of us. By holding the torch, we felt very proud to be a part of a country that is polio-free. Be we are not going to sit idle.” Rajesh Kumar, president of the Rotary Club of Patna South, Bihar.

“The rally ignited tremendous enthusiasm in the Rotarians and goodwill among the people who we are serving. Though the week was hectic and tiring, it was immensely invigorating.” Dr. Madhurendu K. Gupta, president of the Rotary Club of Ranchi North, Jharkhand.

2 thoughts on “Passing the torch for polio eradication”