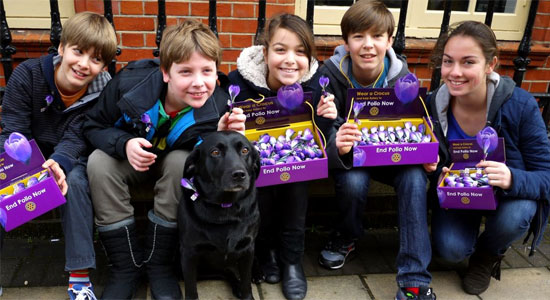 By Lynn Mitchell, past governor of District 1120 (England), and Rotary Crocus campaign coordinator

Like all of you, I desperately want to see polio removed from the face of the world. Like many of you I love crocuses and my favorite color is purple. These may seem unrelated, but they’re not!

My vision was to create a beautiful fabric crocus buttonhole that could serve to publicize Rotary on Rotary Day, and at the same time, highlight the End Polio Now campaign.

I wanted to build on the success of the Rotary International in Great Britian and Ireland (RIBI) Thanks for Life campaign in 2011 where real crocuses were planted throughout the United Kingdom in the hundreds of thousands. They bloomed around the time of Rotary Day and still do each year. The crocus was chosen as their purple color matched the dye painted on the fingers of children who have been immunized against polio.

Fabric flowers – such as Remembrance Poppies – are well established as a charity fundraising and advocacy tool.

When I was governor of District 1120 in 2011-12, we developed and ordered 25,000 crocus buttonholes to sell in about half the RIBI districts during Rotary Day 2012. The trial proved a great success, raising an estimated US$40,000. This year we’ve ordered 150,000 and we’re hoping to raise over $250,000. The crocuses are not only great fundraisers, they’re also walking advertisements, triggering countless conversations about Rotary, the work we do locally, and the End Polio Now campaign.

Better still, the crocus campaign is becoming a global phenomenon (as you can see from this map http://goo.gl/maps/5Knbk). The crocuses are being ordered and test marketed all over the world, from Canada and Nigeria to the United States and Brazil, with donations averaging between US$1.5 to US$5 per crocus.

The aim of the Rotary Crocus campaign is to help to eradicate polio by building awareness and raising funds for the global polio eradication effort. Our target is to be raising $25 million a year by 2015.

This may sound like a lot. And it is. But it’s not difficult to achieve if we all work together. All it takes is for each Rotarian to wear a crocus, make a donation and encourage just a few of their family, friends and colleagues to do the same. Just imagine how wonderful it would be for Rotary Day each year, everywhere we go, to see people wearing a crocus. And once we eradicate polio, the label that says ‘End Polio Now’ won’t be needed, the crocuses can serve as a reminder of what Rotary has accomplished, and then we can really celebrate Rotary Day!

Together we can, and are making a difference. So, please join us. You can visit our Facebook page, follow us on Twitter @rotarycrocus, and help us spread the word.