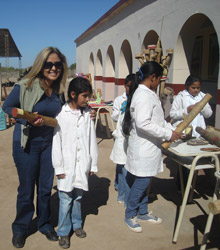 Ana Cáceres became a Rotarian after taking part in a Group Study Exchange.

By Ana Cáceres, a member of the Rotary Club of Autonomia, Argentina

Being part of a Group Study Exchange (GSE) team to District 5420 (Utah, USA) and District 7510 (parts of New Jersey and Pennsylvania, USA) provided me with the main ingredients I needed to become a Rotarian. More importantly, the experience shaped my life.

On 15 March 2007, I began my exchange period in Utah. I knew enough English to communicate but adjusting from almost 40 degrees Celsius (100 degrees Fahrenheit)  in Santiago del Estero to the chilly American spring was rough!

When I left for home, it was hardly the end of the GSE experience. As time went on, I realized how much I benefited from what I had experienced there: the ability to survive  cultural shock, new language and communication skills, and the ability to respect differences.

This Group Study Exchange impacted me, and through my involvement in Rotary it has impacted the lives of many others. I am one of the 2,000 program alumni who have joined Rotary after trying this kind of scholarship.

I joined Rotary on 29 June that same year. I have served through many avenues in my club, taken part in district conferences and institutes, in community services projects, on many important works of translations, and it all goes back to my exchange. It has helped make me the kind of Rotarian I am.

On 1 November of this year, I was chosen as the team leader of a GSE going to Rotary District 7570 (parts of Tennessee and Virginia, USA).

Thanks Rotary. Thanks friends.