By Laura Blizzard, assistant governor of District 7000 and a member of the Rotary Club of Santurce, Puerto Rico

I met Maria while assisting with the End Polio Now lighting of the capitol in San Juan on 23 February, 2011. My telephone number was published in a local newspaper article about Rotary’s polio eradication efforts, and she called to offer her support and help. She said she understood better than many the importance of these efforts. I asked her how. This is her story:

My name is Maria L. Diaz Vargas. I am a polio survivor. I contracted the virus in 1964 when I was three years old. 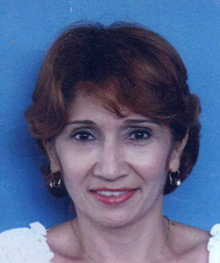 I am the seventh child of a family of eight, and was born in Ponce although I have been living in Moca for the last seven years. I remember that when I was three, I woke up one day with a very high fever that lasted several days. My parents never took me to a doctor since we could not afford it. No one knew what I had, but when the fever ceased, I could not walk. Not even then was I seen by a doctor. Although I never received treatment, as days went by I was able to recover some movement of my limbs.

However, my left leg atrophied from my hips to my toes, developing a permanent partial paralysis in that limb. It was very difficult to walk. So, I barely did. I also developed scoliosis in my spine. As I was growing up, my leg shrunk more and more until I could only walk on the tip of my big toe and with a stoop. With time my discs became herniated and pinched. I would get very tired and would fall very frequently. During my school years, I was the target of many jokes, mockery, rejection and isolation. But I never gave up, and graduated from high school.

While at the Pontifical Catholic University of Puerto Rico, Ponce campus, I had to walk long distances every day, and going up and down stairs became almost impossible. The orthopedist at the Vocational Rehabilitation Administration (RV), a Puerto Rico governmental agency that provides training, support, and rehabilitation services to the handicapped, recommended that I take a sick leave from school to rest. He personally wanted to operate on me. He told me he had studied polio cases in textbooks but had never seen one, and certified me as a polio victim.

In January of 1981, I underwent the first of three surgeries on my left leg. Immediately after the first surgery, the doctor set a body cast from my hip to my toes. In February, I had two other surgeries, after which I was set in another body cast from waist to my toes. I was at home in bed for almost nine months, followed by a long and painful recovery. Even after the cast was removed I suffered from very severe pain for a long time. Nothing helped with the pain and I had to remain in the hospital bed.

My parents gave me away when I was five years old. The lady who took me in became my caregiver. During my recovery from the surgeries, she poured warm water on my leg several times a day to strengthen it. I started physical therapy and was confined to a wheelchair for a long time. Even after many therapies, I could not walk.

But one day, I decided I was going to walk. Armed with lots of faith and prayer, I got up by myself and walked. Not far, a few steps, but I walked. On the advice of my doctors, I began walking with a pair of crutches.

Then, once again, one blessed day I stopped using them. Since then and thanks to God, I walk on my own feet without assistive equipment. I limp, but I walk.

With the help of RV, I obtained my BS in nursing, then with a scholarship obtained my master’s degree. I have been a practicing nurse for 24 years, specializing in critical care, a university professor, and a certified life coach.

With God´s help I have overcome many psychological traumas. I have achieved many spiritual, personal and professional goals. And that is why I appreciate what Rotary is doing, and fully support the polio eradication campaign.

4 thoughts on “The struggles of a Puerto Rican polio survivor”