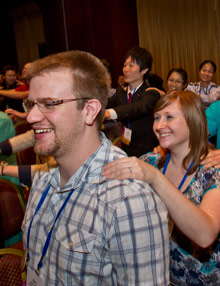 Rotaractors Marc LeBlanc and Eva Gorny take part in an icebreaker during the Rotaract Preconvention Meeting in Bangkok, Thailand.

Rotaract preconventions are a time to meet new friends, get reacquainted with old ones, share projects and experiences. Most of all have fun.

But a time to fall in love? That part didn’t quite make it in the Rotaract handbook. However, Rotaractors Marc LeBlanc and Eva Gorny did just that during the 2008 preconvention in Birmingham, England.

Both are members of the Rotaract Club of the University of Lethbridge, Canada. They went to Birmingham, as friends I might add, to represent their club as it was the recipient of the North American Rotaract Outstanding Project award for raising US$25,000 for a microcredit project in Costa Rica.

The two, along with three fellow members, stayed in a one room hostel during the two-week trip. Its cozy corridors proved to be the spark that lit the match.

Marc, a computer science major, and Eva, a biology student, are here in Bangkok,  Thailand, to pick up the same award that brought them together in Birmingham. The winning formula this year for the club was raising US$14,000 for a family resource center that serves aboriginal communities in Canada, and also securing a donation of two airline tickets to allow community members in the far northern part of the country to access resources of southern Canada.

With two regional outstanding project awards in four years, it’s clear service is the club’s top priority. It’s kind of like Rotaract’s version of a dynasty.

The biggest difference between this year’s preconvention in Bangkok and Birmingham’s is that Eva is sporting an engagement ring on her left hand. The couple is set to get married next year.