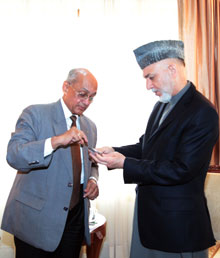 RI President Kalyan Banerjee presents Afghan President Hamid Karzai with a medal in recognition of his support for the Global Polio Eradication Initiative.

On 30 March, Fary Moini, a fellow member of the Rotary Club of La Jolla Golden Triangle, and I left San Diego for Afghanistan.

I have been to Afghanistan a number of times to oversee various educational projects of our club. But this trip was different. This trip had been arranged on a top secret, need to know basis, and was destined to make history. For the first time, an RI president was scheduled to visit Afghanistan, and meet with the country’s president, Hamid Karzai.

Only now, with RI President Kalyan Banerjee safely out of Afghanistan, can I release details of the visit.

On the polio front, there are many causes for concern in Afghanistan. Last year, Afghanistan had 80 cases of the crippling virus, where in the previous year there had been only 20 cases. The primary reason for the increase is difficult access to some areas due to hostilities and lack of government control of these areas, and also the difficulty with contending with the cross-border traffic with Pakistan.

The reality is that some of the more difficult areas are not under government control and are subject to ongoing hostilities. Last week a (non-Rotarian) vaccinator was killed in cross fire. (The details are still sketchy but it is believed the vaccinator was not targeted specifically).

At 7:30 a.m. on 1 April, we emerged from the Kabul airport and were greeted by long time Rotarian friend Mohammad Ishaq, charter president of the Rotary Club of Jalalabad, along with Qaher, a local driver we have used for years.

After meetings, we had lunch in a café called the “Duck and Cover,” the same words written on various bunkers visible throughout the embassy compound. There was a cute picture of a duck on the outside of the café. My eyes lit up when we walked in and I saw two large refrigerators with glass windows fully stocked with hundreds of Heinekens. I failed to notice the huge padlock on the doors of the refrigerator and was told they were only available after 6 p.m. The fact that my body clock was on a different time schedule made no difference to them.

The rest of the day included talks with high level representatives from the Afghanistan office of USAID, the World Health Organization, and UNICEF. On 2 April, we met with President Karzai in the Presidential Palace.

As you would expect, security was tight. The president met us outside his office, shook hands with us, and gave us an audience of 45 minutes. The dialogue was primarily between Banerjee and the president. Banerjee went out of his way to thank the president for his leadership in the Global Polio Eradication Initiative and talked about what we have learned. He was very complimentary toward the Minister of Public Health and also offered ways in which India can help.

The atmosphere was warm and friendly; sometimes jovial, sometimes very serious. Karzai suggested he would like to help us more in the public awareness and communications, and get the mullahs involved publically by using radio to transmit their messages.

We had been requested to leave all gifts outside but when Banerjee mentioned he had a medal to give to the president to honor him for his support, the president said “I like medals. Please have the protocol folks bring in the gifts and alert the photographers for the photo opportunity.” The gifts were brought in and the photographers reappeared.

When the president asked if there are Rotary Clubs in Afghanistan I pointed out that Mohammad Ishaq, who was present for the meeting, was the charter president of the Rotary Club of Jalalabad. I then took a minute to describe the work Fary and I and our Rotary club have been involved in during the last several years in Jalalabad.

I believe one of the results of the meeting will be for President Karzai to have direct communication with the prime minister of India to talk further about polio eradication. On two occasions the president asked how he can be helpful and also commented he must do more to assure the success of this important endeavor.